Jack Black‘s creepy comedy “Goosebumps” got a head start on Halloween, topping Guillermo del Toro‘s R-rated horror tale “Crimson Peak” and edging two-time champ “The Martian” for the top spot with a $23.5 million debut at the box office this weekend.

“The Martian” took second with $21.5 million. The Tom Hanks-Steve Spielberg thriller “Bridge of Spies” debuted in third place with $15.4 million for DreamWorks and Disney, and Del Toro’s pricey chiller finished fourth with $12.8 million.

“This movie was a ball to make, and that fun translated to the screen,” Sony distribution chief Rory Bruer told TheWrap about the box-office champ. “Our marketing team did a great job of getting the word out that ‘Goosebumps’ was something different than typical Halloween fare and families got the message.”

Also hitting theaters, faith-based “Woodlawn,” which debuted with $4.2 million — on the low end of pre-release projections. The overall box office was off slightly from last year’s comparable weekend. But the leaders were just part of the story on a busy weekend at the multiplexes.

The R-rated captivity drama “Room,” starring Brie Larson, debuted with $120,000 in four theaters for A24, giving the awards hopeful a weekend-best $30,000 per-screen average. Universal’s “Steve Jobs” just missed the top ten after expanding from four to 60 theaters and taking in $516,000. That was a second-best $8,605 per-screen average, ahead of next week’s wide opening for the biopic on the Apple Inc. founder, which many see as an awards front-runner.

Also Read: 'Beasts of No Nation' Director Cary Fukunaga on Capturing Violence in Africa: 'You Can't Turn a Blind Eye'

And the debut of yet another film with awards ambitions, the Idris Elba war drama “Beasts of No Nation,” marked the first threatrical release from Netflix, as the streaming giant looks to revolutionize movie viewing as it has TV viewing. “Beasts of No Nation” opened with the top four theater chains refusing to show it because Netflix made it available via streaming as well. It managed $50,699 from 31 mainly smaller theaters. That’s a weak $552 per screen.

“Goosebumps” didn’t run up the opening numbers of similar family fare like”Night at the Museum” ($31 million, 2006), Adam Sandler‘s “Bedtime Stories” ($27 million, 2008 or “Percy Jackson” ($31 million, 2010). Nonetheless, it’s the fourth film out of the last five Sony has released to open at No. 1  and virtually assures there will be a sequel.

The millions of fans of R.L. Stine’s hugely popular collection of scary kids tales gave the family comedy from Sony and Village Roadshow a big target, and Black, director Rob Letterman and young Dylan Minnette and Odaya Rush hit the mark. The audience — 62 percent over the age of 25 — gave it an “A” CinemaScore, even better than the critics, who have it at 71 percent positive on Rotten Tomatoes. 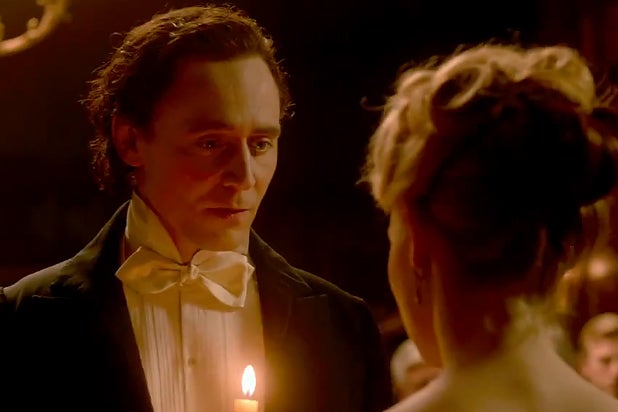 “Bridge of Spies” will be in awards discussions thanks to its pedigree, and appears primed for a long run thanks to its older audience — an eye-popping 89 percent were over 25 years of age — along with strong reviews and an”A” CinemaScore.

Legendary Pictures’ “Crimson Peak” had a bigger budget at $55 million than most horror movies, and a strong cast with Mia Wasikowska, Tom Hiddleston and Jessica Chastain, but couldn’t translate that into bigger box office for distributor Universal. Its debut was below the $22 million that less expansive horror releases like “Insidious Chapter 3” ($10 million) and “Poltergeist” ($35 million) each managed earlier this year.

Part of the problem for “Crimson Peak,” which opened to less than half the opening grosses of Del Toro’s last two releases, 2013’s “Pacific Rim” ($37 million) and 2008’s “Hellboy II: The Golden Army” ($34 million), may have been a disconnect. The Gothic settings and romantic elements may have surprised horror fans, who gave the film a weak “B-” CinemaScore.

The faith-based football drama “Woodlawn” received a rare “A+” CinemaScore, in part because it was preaching to the converted literally, with many theaters booked by religious groups. The PG-rated drama starring Sean Astin (“Rudy”) finished ninth with $4.1 million from 1,562 theaters for distributor Pure Flix.