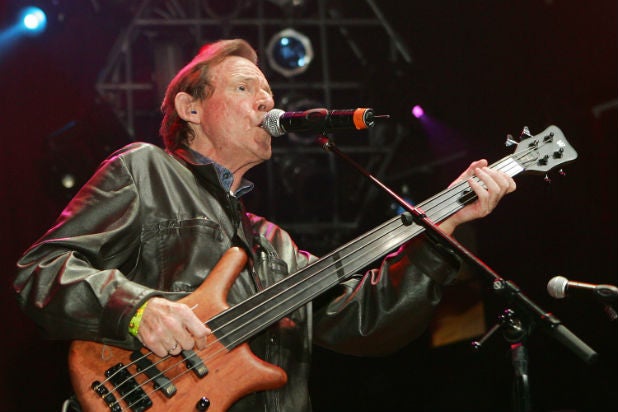 Jack Bruce, the former bassist and vocalist for rock group Cream, has died. He was 71.

“It is with great sadness that we, Jack’s family, announce the passing of our beloved Jack: husband, father, granddad, and all round legend,” the musician’s loved ones stated on his Facebook page. “The world of music will be a poorer place without him, but he lives on in his music and forever in our hearts.”

The cause of death is undisclosed. Bruce had been diagnosed with liver cancer in 2003, and underwent a liver transplant that year.

Born in Scotland and trained as a classical cellist and a jazz bassist, Bruce moved to London after graduating from music school. He became a staple in the 1960s British blues scene, playing in a number of bands, including Blues Incorporated, the Graham Bond Organisation, Manfred Mann and John Mayall and the Bluesbreakers. In 1966, he formed the power trio Cream with guitarist Eric Clapton and drummer Ginger Baker, with the band becoming one of the most popular and influential groups of the era.

Bruce wrote or co-wrote many of Cream’s signature songs, including “Sunshine of Your Love,” “White Room” and “I Feel Free.”

The members of Cream were known for the improvisational skills they brought to their blues-inflected psychedelic rock, and also for their stormy relationship offstage. The band split up in 1968, with all the members moving on to solo careers and to other bands. While Clapton enjoyed by far the biggest success as a solo artist, Bruce made more than a dozen albums of his own, beginning with “Songs for a Tailor” in 1969 and continuing through “Silver Rails” in March, 2014.

Cream reunited in 1993 for Cream’s Rock and Roll Hall of Fame induction and for multiple concerts in London in 2005.

Bruce is survived by his wife, five children and one granddaughter.