Jackie Collins has been the queen of the Hollywood roman à clef for 40 years. Her latest, “Poor Little Bitch Girl,” out Tuesday, gives us more of the juicy same: the jet set, celebrity call girls, corrupt senators and the movie-star murder that ties them all together.

Collins talks to TheWrap about her new book, sleeping with Marlon Brando as a teen, getting thrown out of boarding school and saying no to Warren Beatty.
Are the people in your books based on real people?
They are a mixture of people I’ve met over my life. I’ve had an extremely interesting life because my husband used to own, when he was alive, discotheques. So we had a Tramp in L.A. and a Tramp in London and everybody passed through our doors from sports stars to movie stars to boxers to athletes. I mean it was amazing the things that I’ve seen over the years. So I take these characters, a little bit of this one and that one, and mix it all up. 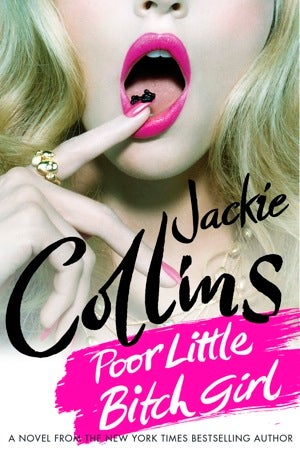 You take a whack at Amy Winehouse in the book. You named the dog after her!
I’m a huge Amy Winehouse fan. It just sort of came to me that that would be fun to do because she had a kind of light voice, a kind of bark like Amy. She’s got that growly voice.
Most of your characters are under 30. How do you keep current?
I’m actually a popular culture junkie. I love keeping up on things on the internet, reading all the fabulous stuff that goes one. Perez is funny, thedailybeast, the radar.com, all of those.
I like to be able to mention things before they actually happen. For instance, I mention Robert Pattinson. When I wrote the book he wasn’t as big as he is today, but I knew he would be. I just had this feeling.
Speaking of male sex symbols, you once said of Warren Beatty, “If a chair looked at him sideways, he’d proposition it.”
He was my sister’s boyfriend when I was thrown out of school and I came to Hollywood.

He propositioned you when you were 15 …
I looked at him in amazement cause he was living with my sister. “No thank you.” I think Warren feels he has a reputation to live up to.

Around that time you had a brief affair with Marlon Brando?
Yes, he was my favorite movie star, and I actually was 16. I met him at a party and it was all bets are off because I was a very street smart 16 and what are you going to do when you come face to face with your favorite movie star and you’ve seen “The Wild One” 10 times?

That’s the fantasy of every woman of your generation and half the men!
Well yes, I think any 16-year-old today who came across Robert Pattinson would do the same thing!
How’d he measure up?
Oh honey, he lived up. When you look back on his body of work it is so fantastic, it is so incredible. He was the major actor of his day. I would say him and Jack Nicholson.
And you hung around with the Beatles …
My had a club called the Ad Lib, and the Beatles used to come there all the time. In fact, Ringo was the first one to give him a cigar when we had our first child. They used to be there and the girls would be throwing themselves at them and they used to swap wives and things. It’s funny but, y’know, back in the ’60s it was crazy!
So, after 27 books, does it ever get old?
It always feels fresh, and I’ve been kind of like chomping at the bit to start my next book now. It’s called “Goddess of Vengeance: The Continuing Adventures of Lucky Santangelo.”
She’s been your girl for years. Who would you like to see play Lucky on the big screen?
Angelina Jolie. She’s Lucky, she’s strong and feisty and beautiful. I just love her. I think she’s a fantastic woman.
Are you worried for her and Brad?
I’d like them to stay together, but what are you going to do? The tabloids have been responsible for pulling them apart by their ridiculous headlines every week for the last three years.
I was at an event maybe two weeks ago, the big UNICEF event with Jerry Weintraub, and they were at the next table to me and they were all over each other. You never know.
Young women I talk to all seem to wonder why anyone would get married.
Well, I think people get married for children. I think that’s the main thing. Children are the new accessory in Hollywood. Have you noticed?
x
Looks like you're enjoying reading