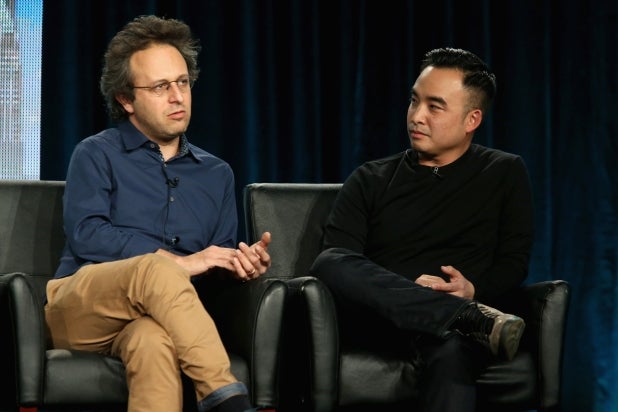 Jake Kasdan and Melvin Mar, the producing team behind “Fresh Off the Boat” and “Speechless,” have signed a new, multi-year overall deal with 20th Century Fox Television. Under the deal, the two will develop, produce and direct projects for network, cable and streaming platforms through their production company The Detective Agency.

Kasdan and Mar have been under an overall deal with the studio since 2012. The list of projects they will executive produce include the upcoming ABC series “Bless This Mess” premiering in April, and “Heart of Life,” a new drama based on John Mayer’s hit song. ABC has ordered the pilot, which is currently in production, with Ben Queen as screenwriter and Anne Fletcher directing.

“Jake and Melvin have been a dream team to this studio for years, and keeping them here was a huge priority for Howard [Kurtzman] and me,” Jonnie Davis, president of creative affairs at 20th Century Fox Television, said. “They are smart, wildly talented guys with spectacular taste and incredible creative instincts. They love big swings and they elevate everything. They are also fun and collaborative creative partners — everyone wants to work with them. We wish we could clone them, but the fact is they are both so prolific we don’t need to. We couldn’t be happier they are staying in the family.”

“For eight years, 20th has been a fantastic and supportive place to work,” Kasdan and Mar said in a joint statement. “We’re thrilled that Peter, Dana, Jonnie and Howard are bringing us along, as they begin this next chapter.”

Kasdan and Mar are also in production on the sequel to their feature “Jumanji.” Separately, Kasdan directed the pilot of “New Girl” and was an executive producer for the duration of the comedy’s 146 episode run.

Kasdan and Mar are repped by WME as well as attorneys John Sloss and Jacqueline Eckhouse.