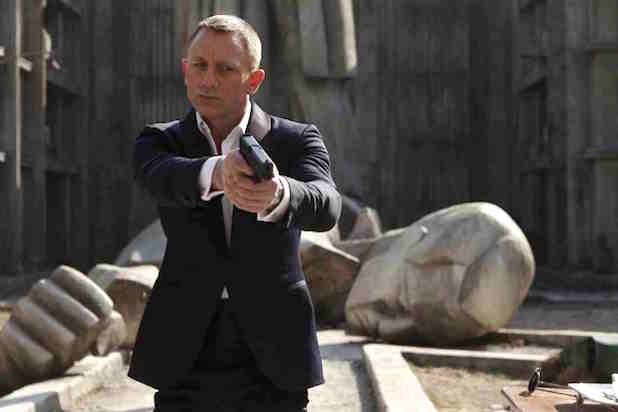 Four major studio players are locked in a bidding war for the one-off rights to the next James Bond film, TheWrap has learned.

In addition, Megan Ellison’s upstart Annapurna Pictures is also in the running for the rights, according to the New York Times, which first reported the high-stakes competition on Thursday.

The film is expected be the swan song for Daniel Craig in the title role after four hit outings.

A representative for Annapurna could not be reached for comment. Representatives for the aforementioned studios declined to comment on the matter.

It’s a credit to the value of the property owned by MGM and longtime producer EON — the two companies that control the franchise — that their suitors are vying for a one-film contract for a project without a director attached and no known timetable for release. The most recent deal iteration with Sony encompassed four movies.

According to the Times, MGM wants to keep its “options open as it considers a sale or public offering.” MGM has not yet responded to TheWrap’s request for comment.

See Photos: 7 Female Stars Who Could Be the Next James Bond: From Angelina Jolie to Gillian Anderson

Sony pulled out the big guns to keep the British spy series on its Culver City lot, recruiting Sony Corporation CEO Kazuo Hirai to personally deliver the pitch to MGM and EON. The pitch meeting was even held on a sound stage styled as a set from the 1963 Bond film “Dr. No.”

MGM and EON were also hosted on the Fox lot, an individual familiar with that meeting said.

It’s a lot of pomp and circumstance for a property that provides more brand collateral than money in the bank. According to the Times, Sony footed half of the $250 million production budget for 2015’s “Spectre” but recouped just a quarter of certain profits.

An email leaked in the 2014 Sony hack, from the desk of then-business affairs head Andrew Gumpert, said “Spectre” would only net about $38 million in profit should it perform comparably to its predecessor, 2012’s blockbuster “Skyfall,” which took in $1.1 billion at the global box office.

“Spectre” earned $881 million, which offers some clues about the byzantine profit structure of the franchise.

For most studios, the deal would provide a sure-fire hit even if the profits margins are minimal.

For an upstart like Annapurna, which last month signed a distribution deal with MGM, scoring 007 would be a defining moment. Though the company has yet to roll out a single film — its first theatrical release, Kathryn Bigelow’s “Detroit,” lands in theaters on August 4 — Ellison has quietly spent two years hiring top talent in distribution, marketing and public relations to begin releasing titles.