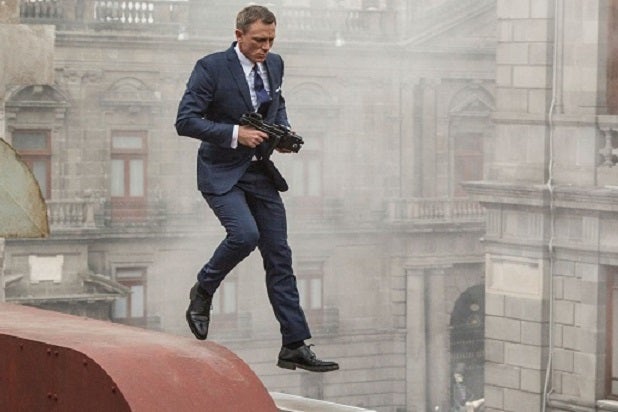 The James Bond thriller “Spectre” and “The Peanuts Movie” will spend their second weekends atop the domestic box office after strong performances Friday put them on pace for $34 million and $24 million, respectively.

The spy saga from MGM, Eon Productions and Sony came into the weekend having banked $350 million worldwide, and added another $10 million to its domestic total Friday. It debuts in China this weekend and its global haul could hit half a billion dollars by Sunday.

Fox’s “The Peanuts Movie” took in $5.6 million Friday and the G-rated 3D animated family film should go over $80 million by Sunday.

Also Read: Why 2015 Box Office Record May Come Down to 'Star Wars: The Force Awakens'

The ensemble holiday film “Love the Coopers” had the strongest debut of three wide-opening movies, topping the soft first days of the Antonio Banderas mining disaster drama “The 33” and the inspirational football tale “My All-American.”

The PG-13-rated Christmas comedy from CBS Films is heading for $8.2 million over the three days, ahead of expectations and good for third place, but nowhere near the leaders.

“By the Sea,” a low-budget romantic drama starring Angelina Jolie and Brad Pitt that Jolie wrote and directed, drew a yawn in its limited debut for Universal. It averaged  $3,811 per location after taking in just over $38,000 Friday. That’s not good, but not a shock given the weak reviews (32 percent on Rotten Tomatoes) for the $10 million film bankrolled by Jolie and Pitt.

Matt Damon‘s long-orbiting “The Martian” took in another $2 million Friday and will come in around $6.6 million in its seventh weekend. That would be another strong hold (-26 percent) for the sci-fi tale and push it past $200 million domestically for Fox and over $465 million globally.

Also Read: 'Peanuts Movie' Is a Hit - Why a Sequel Isn't Already in the Works

The Jessie Nelson-directed “Love the Coopers” got a lift from older audiences, particularly women, and brought in $2.8 million in its first day Friday. The holiday tale stars Diane Keaton, Alan Arkin, Olivia Wilde, John Goodman and Amanda Seyfried. The $17 million CBS production, distributed in conjunction with Lionsgate, was the only opener to top expectations.

“The 33,” based on the true-life tale of 33 miners trapped in Chile in 2010, was fifth with $1.8 million Friday and may not crack $6 million over the three days for Warner Bros. and Alcon, which financed the $25 million survival tale.

That’s beneath expectations that were low to begin with. The film did get an “A-” CinemaScore from moviegoers, who liked it better than the critics (40 percent on Rotten Tomatoes).

That’s the positive for “My All-American,” too. The tale of Texas college football hero Freddie Steinmark is the directing debut of “Hoosiers” and “Rudy” writer-producer Angelo Pizzo.

It fumbled its way to $516,000 from 1,562 theaters for distributor Aviron (the renamed Clarius Entertainment), but did draw an “A” CinemaScore, suggesting that true believers dominated the thin crowds.

The overall box office was soft, and the weekend was running about 25 percent under the comparable weekend last year, when “Dumb and Dumber To” led the way with $33 million.