"Avatar" may still be a big question mark in the Oscar race, but its director, James Cameron, is a winner in the eyes of the Santa Barbara International Film Festival.

The SBIFF, which annual gives out a variety of awards to actors and filmmakers during the thick of awards season, has named Cameron the recipient of its top honor, the Lucky Brand Modern Master Award.  The tribute will take place on February 6, 2010, four days after the announcement of Oscar nominations.

In making the announcement, festival executive director Roger Durling called Cameron "one of the most visceral storytellers working in cinema today" and dubbed "Avatar" "one of the most ambitious projects ever." 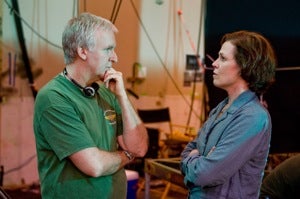 An annual retreat in the days between Oscar nominations and the show itself, SBIFF is one of the highest-profile of the film festivals that give honors (and valuable publicity) to contenders in the runup to the Oscar show.  (The Palm Springs International Film Festival is another.)  Its honors are revealed long before the Academy announces its own nominees, which means that SBIFF generally salutes a mixture of those still in the Oscar race with those who’ve been eliminated.

Because it’s a career-achievement honor, the Modern Master Award allows the festival to salute a film, and give a boost to a presumed contender, without singling out a film that has yet to be seen — though, of course, the honor will read as a significant endorsement of "Avatar" and its director.

The Santa Barbara International Film Festival website is here.  The festival will run from February 4th through the 14th, 2010.