James Corden almost had a major slip-up during his monologue on Monday night, in which he narrowly avoided leaking Oprah Winfrey’s phone number on air.

Corden and his on-stage crew were discussing celebrity hotels to open Monday night’s show, with Corden asking whose hotel his comrades would want to stay at, if it were to actually open. After some deliberation, the men unanimously agreed that they would stay in a hotel opened by Oprah.

Corden’s keyboardist Reggie Watts then joked that it would have to be called an “O-tel,” causing Corden to promptly freak out. When someone on stage suggested Corden actually call Oprah to pitch the idea, he did exactly that. But he also almost revealed her number on speakerphone. 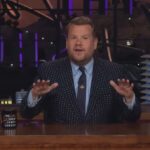 “Hang on, have I got her number?” Corden mused while searching his phone. “She did call me and I saved it!” Though he wasn’t totally sure it was a direct number for Oprah, Corden called it anyway, and was sent to voicemail. As he listened for anything signifying he had reached who he wanted to, the automated voicemail message began reading out the number he called.

Corden quickly ended the call, after the automated messaged read out the numbers three and one. “Neil Patrick Harris is gonna be hosting this show tomorrow,” one of Corden’s colleagues joked.

Minutes later, Corden received a call back — the number had no caller ID — and it was indeed Oprah Winfrey. “Look at you! Hey babe,” she said. Corden then proceeded to pitch the “O-tel” idea as intended, to which Oprah said “Absolutely!”

You can watch the full encounter above.