Following the horrific massacre of 19 children and 2 adults in Uvalde, Texas on Tuesday, James Corden spoke extemporaneously on the subject after taping the day’s episode of “The Late Late Show.”

While adding that he thinks America is better than this as a country, he also lamented that the U.S. is “one of the most backward places in the world” when it comes to our problem of mass violence.

Watch the video further down the page, and read on for a transcript.

“Good evening. We’ve just finished taping our show, where we tried to have fun and be joyful, but ultimately it was a night of underlying sadness, as more news of events in Texas came into us,” Cordon said during the segment. 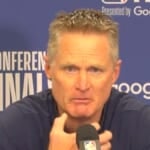 “As you’ll know by now a gunman entered a school in Texas and killed at least 18 children and two adults.  It’s unfathomable,” he said. “As a father, I can’t imagine the horror of that phone call.  When I dropped my kids off at school this morning, and kissed them goodbye, it doesn’t cross your mind that that could ever be the last goodbye.”

“The thought of that phone call that your child is the victim in a mass shooting is beyond comprehension as a human being,” Corden continued. “I am so deeply sad for the families of these children, the trauma of the survivors, and for the future these kids will never see.”

The shooting is the 212th mass shooting of 2022, according to at least one count. And the fact that yet again, it is clear from statements across the political spectrum that nothing will be done to overcome right wing opposition to even tepid laws that could deal with the epidemic, had Cordon feeling especially bleak.

“I don’t know what has to happen to change things here.  I am constantly shocked by the number of people who must think this is an okay byproduct to never make meaningful changes to gun laws,” Corden said. “It doesn’t make sense to me. This doesn’t reflect the country that I think America is. The America I’ve always admired. You have a problem and you solve it. You’re on the forefront of medicine, of technology, of innovation. When there’s a world war, you are the ones we turn to!”

“Nothing will change. Gun money will continue to get in the way of morality. And so just as I stood here last week and talked about a mass shooting at a grocery store in Buffalo, today is an elementary school in Texas,” he said. 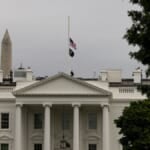 “I will probably be stood here talking in another week or two about another place. Words of ‘thoughts and prayers’ will come from our leaders … but I fear change never will,” Corden said as he concluded. “I hold out hope that this country will eventually wake up and change this senseless gun culture … while my heart simply goes out to everyone in Texas tonight.”

Watch his comments below: