Thursday marked the return of “Crosswalk the Musical” to “The Late Late Show With James Corden.” Since it’s been awhile, here’s a refresher on the concept: Corden and company perform numbers from a show during red lights at the intersection of Beverly and Genesee just outside Television City (where Corden tapes), much to the chagrin of Los Angeles commuters.

This time around, Corden tackled Amazon’s just-released “Cinderella” and invited stars Camila Cabello and Idina Menzel. The host also invited Billy Porter, but intentionally gave him the wrong address because he’s intimidated by the “Pose” star’s singing, dancing and charisma.

“Billy Porter is the only actor I’ve encountered that’s almost as talented as I am,” Corden admits. Of course, Porter finds out he’s been duped and is NOT pleased at all. In fact, he’s “pissed off.” 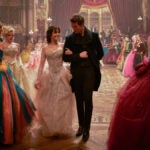 They quickly resolve their conflict for the sake of art (and Corden reduced to playing a mouse, which he does in the film). The “Cinderella” cast don budget costumes and prance into the intersection, performing numbers including a mash-up of Janet Jackson’s “Rhythm Nation” and Desiree’s “You Gotta Be” and some original music from the film.

Watch their traffic show-stopping performances above.