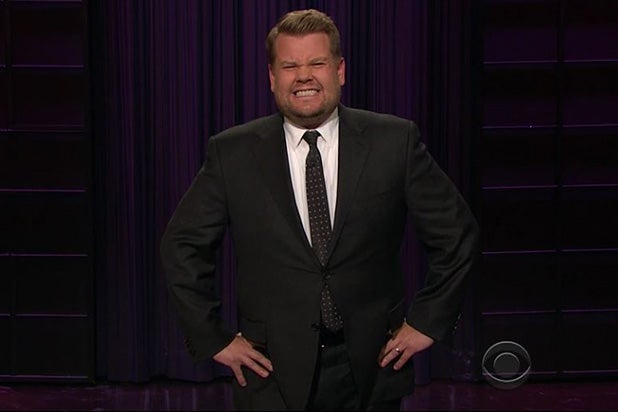 In his monologue on Monday, “Late Late Show” host James Corden attempted to apologize for kissing Sean Spicer at the Emmy Awards on Sunday — and managed to turn it into another joke.

“Now, I know you think that’s a picture of me kissing Sean Spicer, but in the spirit of Sean Spicer, no it isn’t,” he said on his show Monday night.

In case you missed it, Corden was responding to a photo taken following the Emmys on Sunday in which he can be seen planting one on the cheek of the former White House press secretary who made a surprise cameo during the awards telecast.

“To be fair, everyone was kissing ass last night at the Emmys — I just happened to kiss the biggest one there,” Corden said.

Corden first tried some self-deprecation to respond to his critics. “I just want to say, I think people are forgetting that this man lied to the American people and should not be embraced. These Hollywood phonies kissing up to Sean Spicer are disgusting. I mean, who did this? Who are we talking about here?”

Also Read: James Corden Clowns Around as Pennywise in 'It' Spoof (Video)

Then he turned more earnest. “Understandably, some people have been disappointed by this photo. In truth, I’m disappointed by it as well,” he said. “I’ve been reading a lot of harsh comments on Twitter today, and I hear you loud and clear. Truly, I do. So much so that I’m starting to regret that ‘Carpool Karaoke’ that we’ve taped with Steve Bannon. Feels like a mistake today.”

Corden then continued the bit by showing multiple photos of him kissing other celebrities, including Harry Styles, Allison Janney and Daniel Radcliffe.

“Basically what I’m saying is, I need to learn how to shake hands.”

Here were some of the online reactions to Corden’s initial smooch, including a comparison to NBC late-night host Jimmy Fallon’s infamous tussling of Donald Trump’s hair last year.

This is how @JKCorden normalizes Sean Spicer. This isn't cute or having a laugh. There isn't any middle ground here. Corden chose. #Emmys https://t.co/Mcr4pyIiGP

Dear @JKCorden
This is disgusting. You had JUST won me over. You are a spineless hypocrite.
Love,
Ken https://t.co/XtT5Yz1hbV

The 2017 Emmy Awards were full of highs and lows on Sunday night. From host's Stephen Colbert's opening monologue to the final award of the night, here are the show's best and worst moments.