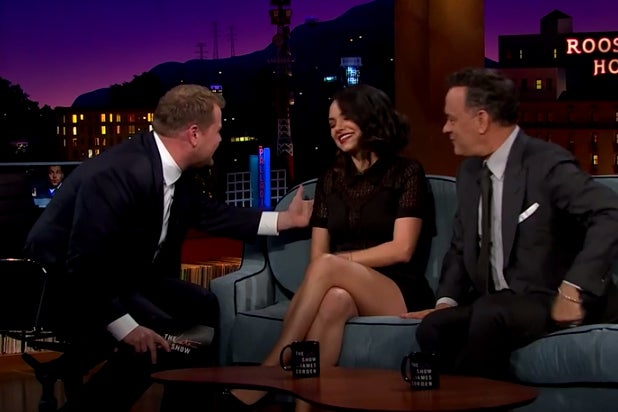 It didn’t take very long for James Corden to lose the spotlight on his own “Late Late Show” debut — guest Mila Kunis was outted by Tom Hanks for being a newly married woman.

Apparently, Kunis and longterm beau Ashton Kutcher tied the knot at some point between “That ’70s Show” and Monday afternoon’s taping. Or, “maybe” they did, if you believe the highly reluctant Kunis. (Don’t believe her.)

The news came up as Corden asked about Kutcher as a dad. As the actress boasted about his patriarchal abilities, Hanks stepped in to clarify: “You mean your hus-Ashton?”

While Kunis was very hesitant to confirm at first (and second, and third), the ring on her finger said it all.

“We’re going to turn this into a wedding party, we’ll be right back!” Corden closed the segment, offering his jubilant congratulations to the bride.