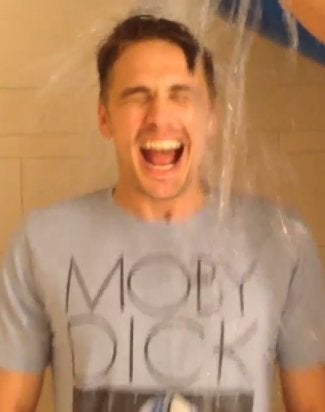 James Franco took the ALS ice bucket challenge to another level, after getting nominated by Selena Gomez. The prolific actor took to Instagram to post video of him accepting the challenge, which included a “Moby Dick” t-shirt, a small yellow piece of paper and no pants.

He saved the no-pants reveal for the end of the video. After he’d given Gomez a shout-out for nominating him and been doused with the bucket of ice and water, the camera panned out to reveal his three nominations.

Franco rushed through saying their names, but it was difficult to hear. It wasn’t much easier to see them on the small piece of paper he was holding strategically over his crotch. His nominees were Zach Braff, Keegan Allen and Joey King.

The ALC Association’s ice bucket challenge has gained a lot of momentum this year, with many celebrities getting in on the action. In a statement released on Monday, the organization said that it had raised $15.6 million in donations since July 29, compared to $1.8 million during the comparable time last year.

The challenge asks people to douse themselves with buckets of ice water, and then nominate others to do so. Nominees may also choose to donate to the cause as a way out of doing the challenge, or in addition to doing it. It’s an effort to raise awareness of ALS, or Lou Gehrig’s Disease, as well as money.