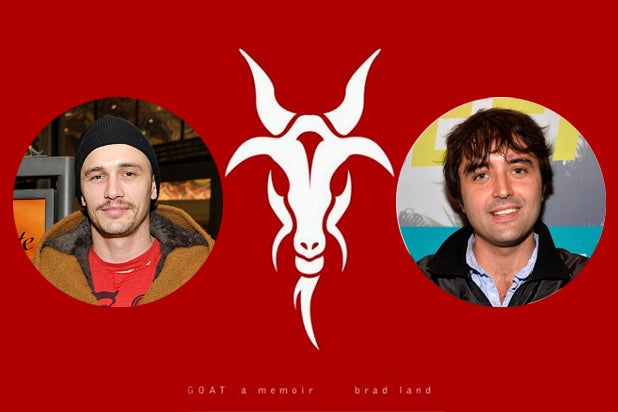 James Franco has come on to produce “Goat,” an adaptation of Brad Land’s acclaimed memoir that “King Kelly” filmmaker Andrew Neel will direct for Killer Films and Rabbit Bandini Productions, TheWrap has learned.

Neel will direct from a screenplay by David Gordon Green, with revisions by Neel and Mike Roberts.

Reeling from a terrifying assault, a 19-year-old boy enrolls into college with his brother and pledges the same fraternity. What happens there, in the name of “brotherhood,” tests the boy and his loyalty to his brother in brutal ways.

David Gordon Green had initially planned to direct “Goat” (with Emile Hirsch set to star) before handing the reins over to Jeff Nichols (“Mud”) in 2008. While the script has certainly changed since then, this reporter read an earlier draft of “Goat” and remembers it being an incredibly moving and powerful story that takes aim at ritual hazing.

Neel started out writing, directing and producing short films before making the leap to features with 2006’s “Darkon.” After receiving critical acclaim for his 2012 indie “King Kelly” he produced “Stand Clear of the Closing Doors,” which also garnered strong reviews. He’s represented by CAA and Washington Square Films.

Rabbit Bandini’s recent projects include Gia Coppola’s “Palo Alto” and Franco-directed adaptations of Cormac McCarthy’s “Child of God” and William Faulkner’s “As I Lay Dying.” Franco, who is also repped by CAA, just released his “Saturday Night Live” documentary on Hulu Plus.