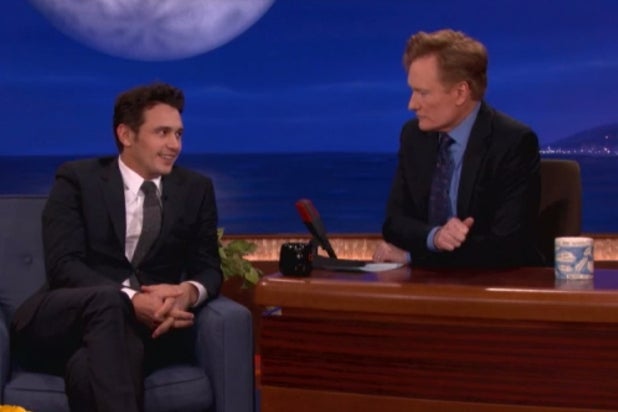 James Franco is a drug dealer — again — in his new film “Homefront,” which he promoted Thursday on “Conan.”

It’s at least the third time the actor has played a pusher on film (“Pineapple Express,” “Spring Breakers”) — though there have probably been other similar roles, he admitted.

In reality, the job doesn’t suit Franco: “I would not be a good drug dealer,” he admitted to Conan O’Brien. “If you put aside the high, the glamorous murders … it’s just like a business, right? And I hate business.”

Plus, Franco — who plays a meth cook in “Homefront” — said he was “horrible” at chemistry, adding: “I’m the sidekick on ‘Breaking Bad.'”

Still, the fans love on-screen him in the seedy industry. Franco’s character from “Spring Breakers,” Alien, is so popular among his most-rabid fans that some of them even get tattoos of his grilled-out, cornrowed mug.

O’Brien’s shared a photo of one superfan’s ink on TBS last night, and Franco was wary to comment on the very permanent artwork.

“We should be very careful about what we say because that tattoo is not going away,” Franco said. “You can’t ever say it’s bad.”