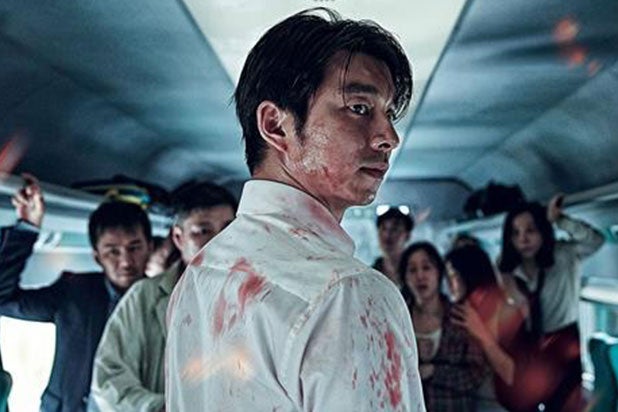 New Line Cinema is in negotiations to acquire a “Train to Busan” remake that will be produced by James Wan and written by Gary Dauberman, an individual with knowledge of the project told TheWrap.

The original 2016 film was directed by Sa-ho Yeon and follows passengers on a train stuck between Seoul and Busan that are trying to survive while a massive zombie virus breaks out around them.

The South Korean film grossed $85 million overseas and $2 million in the United States.

Also Read: 'The Nun' Got a Big Box Office Boost From Latinos

James Wan’s Atomic Monster is producing, along with Gaumont — who is the rightsholder. For Atomic Monster, producers are James Wan and president of production Michael Clear. Gary Dauberman will be a producer and will also adapt the screenplay.

Atomic Monster’s current release “The Nun,” from the “Conjuring” Universe, is the box office smash. The company is in post production on “The Curse of La Llorona,” and in pre production on the “Untitled Annabelle Project,” the next installment of the “Conjuring” Universe. In television, the company has “MacGyver” about to start its third season on CBS and “Swamp Thing” for DC Universe.

Dauberman is set to write and direct (in his debut) the “Untitled Annabelle Project,” the next installment of the “Conjuring” Universe franchise. His writing credits include “Annabelle,” “Annabelle: Creation,” “It,” “The Nun,” and “It: Chapter 2.” He is also an executive producer of “The Nun;” a producer on “The Curse of La Llorona;” and a producer and writer of “Are You Afraid of the Dark?” In television, Dauberman is currently writing “Swamp Thing” with Mark Verheiden. He is also an executive producer on the DC series.

A prequel to “The Conjuring” series of horror hits, “The Nun” opens Sept. 7

"The Nun," a prequel to "The Conjuring" series of horror films, finds a young nun traveling to Romania to investigate a demon that has potentially latched itself onto a nun. With that premise, things are bound to get a little crazy. Of course, there's a long history in film of taking chaste, pious women who have become nuns on film and testing their resolve, of taken their faith to wild extremes, or playing on that goodness for comedy. Say a few rosaries and check out these nun movies.