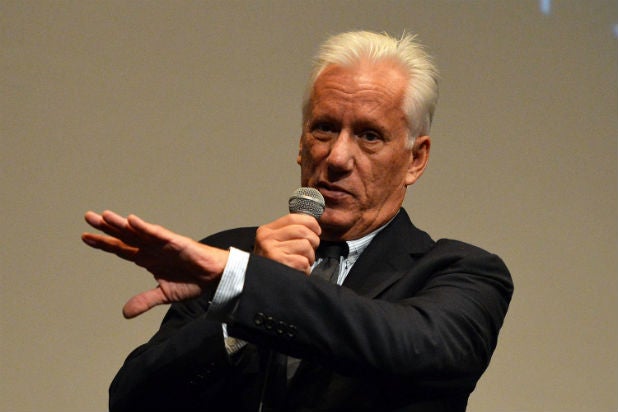 James Woods found himself in a Twitter tussle Tuesday night, after Canadian poker pro Daniel Negreanu compared the “Once Upon a Time in America” actor to scandal-clouded Senate candidate Roy Moore.

Woods didn’t mince words, calling out Negreanu as a “cowardly piece of s—.”

The actor lashed out at Negreanu after he tweeted a link to an article about “Weeds” actress Elizabeth Perkins touting a sign reading “James Woods #MeToo” at a march to support victims of sexual assault and harassment over the weekend.

“Add James Woods to the list of men accused of chasing 16 year old girls,” Negreanu wrote. “He appears to have a lot in common with Roy Moore. What is wrong with these people? Disgusting. Do I believe these women? 1000% yes.”

Moore, who’s currently running for U.S. Senate in Alabama, has been accused of sexual misconduct against multiple women who were in their teens at the time.

“Say it like a man to my face, you cowardly piece of sh–,” Woods replied to the tweet. “Say it as a statement of fact, so If you have any money left, you might actually be worth suing, unlike these other losers with no money and big mouths. And how old was Evelyn Ng when you were her ‘mentor,’ you hypocrite?”

The last sentence was a reference to Negreanu’s fellow Canadian poker pro Evelyn Ng, who Negreanu dated and helped develop her poker technique.

Woods has been accused of untoward behavior toward teenage girls before.

In September, actresss Amber Tamblyn accused Woods of trying to pick up her and a friend and take them to Las Vegas when Tamblyn was a teenager.