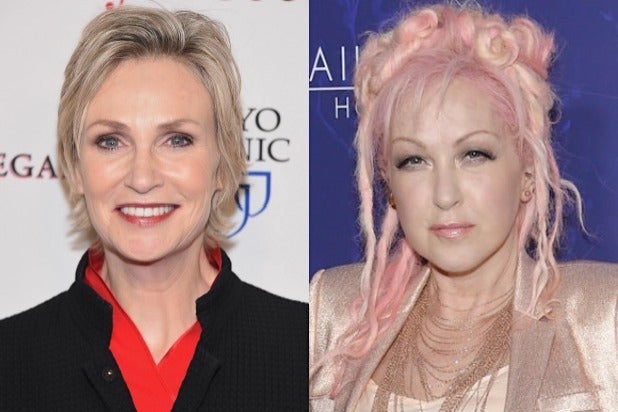 Jane Lynch spilled the beans about a brand-new show with singer Cyndi Lauper that she just sold to Netflix.

“I pitched a show to Netflix and they bought it, so that’s nice. I don’t know if I can talk about it, but I’ll tell you it’s with Cyndi Lauper, so there,” Lynch said backstage in the press room at the 2019 Creative Arts Emmys Sunday. “We’ll see. It’s just a day at a time for me. I enjoy the moment.”

When pressed for more details, Lynch hesitatingly relented: “I wonder if I should. I don’t think I can,” she said, adding, “I know, I did. We’re our age, which you know, I’m almost 60 and [Lauper is] 65, and we’re looking for our next act without having husbands or children. And there will be two other folks in it who haven’t been cast yet. So it’s kind of a ‘Golden Girls’ for today.”

Sunday night, Lynch took home the Creative Arts Emmy for Outstanding Guest Actress in a Comedy Series for her role as comedian Sophie Lennon in Amazon’s “The Marvelous Mrs. Maisel.”

Lynch dedicated the award to female comedians of the 1960s, including Joan Rivers and Totie Fields and Phyllis Diller, who she dubbed “those gals who blazed a trail.”