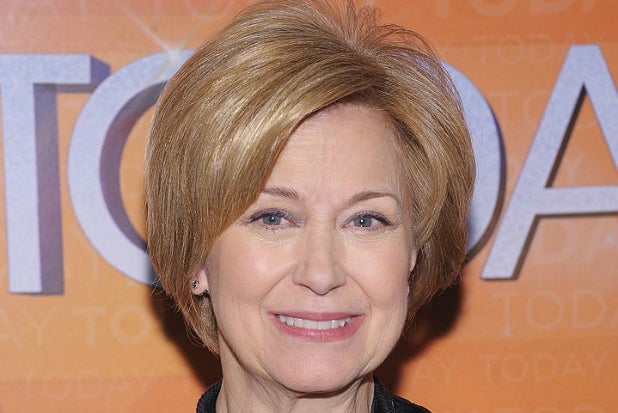 Sunday was Osgood’s final broadcast as host of the weekly show.

Here is the announcement from CBS:

CBS News President David Rhodes announced today that Pauley will succeed Charles Osgood as anchor. Osgood is retiring on Sept. 25, after 22 years as anchor of the award-winning broadcast and after nearly 50 years at CBS News. Pauley’s first broadcast in the new role will be Oct. 9, when she’ll become only the third anchor in the history of CBS SUNDAY MORNING.

Pauley joined CBS SUNDAY MORNING in 2014 as a contributor. Since then she’s been a substitute host and has delivered a steady stream of high-profile interviews and reporting to the broadcast.

“Charles Osgood set the standard for CBS SUNDAY MORNING,” Pauley said. “And it’s a great honor to be given the chance to further our show’s legacy of excellence. I look forward to bringing loyal viewers the kind of engaging, original reporting that has made the broadcast so irresistible for so long.”

“Jane Pauley is the ideal host for the most wide-ranging news program on American culture, our beloved CBS SUNDAY MORNING broadcast,” said Rhodes. “Charles Osgood is a television news legend–and so is Jane Pauley.”

“We first got to know Jane when we did a story about her,” said Rand Morrison, Executive Producer of CBS SUNDAY MORNING. “Our viewers immediately responded by suggesting she belonged on SUNDAY MORNING permanently. And as is so often the case, they were right. She’s a dedicated, experienced broadcast journalist. But every bit as important, she’s a delight to work with. A worthy successor–and a perfect fit.”

Highlights of Pauley’s work at CBS SUNDAY MORNING include a profile of Hillary Rodham Clinton; a moving interview with 11-year-old Marquis Govan, who became a voice of reason in the aftermath of the Ferguson, Mo., shooting of an unarmed man by a police officer; the only TV interview with David Letterman about his retirement from late night television; and a report about a group of educators who lived through the shooting at Sandy Hook Elementary School in Newtown, Conn., now fighting to change gun control laws.

Pauley is the recipient of multiple Emmys, the Walter Cronkite Award for Excellence in Journalism, the Edward R. Murrow Award for outstanding achievement and the Gracie Allen Award from the Foundation of American Women in Radio & Television. Pauley is a member of the Broadcast and Cable Hall of Fame.

Before joining CBS News, Pauley was a familiar face on morning, daytime and primetime television. She began her network television career in 1976 as a co-host of NBC’s “Today” show. She spent 13 years on the morning broadcast, and a decade as the anchor of “Dateline NBC,” starting in 1992. She was the host of the syndicated daytime series, “The Jane Pauley Show,” in 2004.

Pauley has written two New York Times bestsellers. A memoir, Skywriting: A Life Out of the Blue (Ballantine Books 2004), and Your Life Calling: Reimagining the Rest of Your Life (Simon & Schuster 2014), based on her award-winning series on “Today” about people who are 50 and over starting different careers, learning new skills, making a difference or pursuing their dreams.

A longtime advocate in children’s health and education, Pauley is also a highly regarded spokesperson in mental health.

She and her husband, Doonesbury cartoonist Garry Trudeau, are the parents of three grown children and are grandparents to two.

CBS SUNDAY MORNING is broadcast Sundays (9:00-10:30 AM, ET) on the CBS Television Network. Rand Morrison is the executive producer.