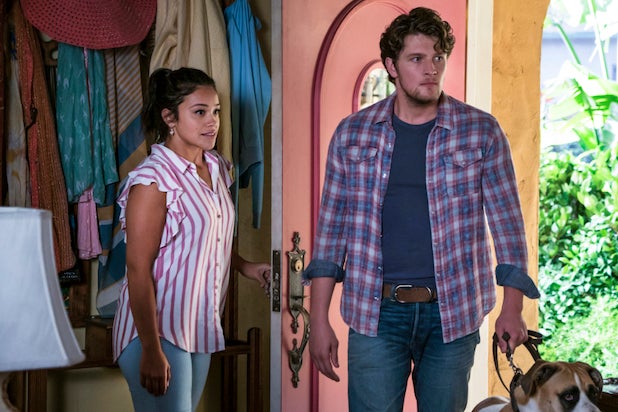 (Warning: This post contains spoilers for Wednesday’s “Jane the Virgin”)

Team Michael or Team Rafael? We thought “Jane the Virgin” fans would never have to worry about this problem again after Michael (played by Brett Dier), you know, died.

But the argument over who should end up with Jane (Gina Rodriguez) resurfaced last month, when the CW series’ fifth and final season premiered and revealed that not only had Michael been alive this whole time, but has amnesia and thinks he’s some guy from Montana named Jason.

Fans probably thought they had laid the debate to rest again tonight, after three episodes of hoping against hope her husband would get his memory back led Jane to give up and ask Jason/Michael to sign divorce papers. Oh, this all went down just as Jane and Rafael (Justin Baldoni) are also in a better place than ever in their newly-rekindled romance.

And then, in perfect “Jane” fashion, Michael got his memory back while standing outsides Jane’s front door after he handed her the papers and they said their final goodbyes, in the exact spot he was in when he first kissed Jane.

We know! That cliffhanger twist means more drama than ever leading into the show’s final episodes. So TheWrap asked Dier to tell us what happens next — and it wasn’t much.

Also Read: Brett Dier on Michael's Return to 'Jane the Virgin' for Final Season - and 'Being Reborn' as Jason

“I don’t know what I can say about that, but I can say that I want to tell you, but I can’t (laughs)” Diers told us. “But it definitely, obviously makes things even more intense, you know. Everything just kind of doubles at that point. So, the season already starts off with three episodes that are really filled with a lot of emotion and then after that it kind of doubles. It gets even more confusing for everyone involved. So I’m very excited to get to that. The show just gets more emotional and intense after those episodes.”

Because Jane was married to Michael before he *died* and became Jason but now she’s deeply in love with Rafael again and possibly about to get engaged to him, we made Dier tell us who he wants to see her end up with. Again, he wasn’t super helpful.

We’ll see who wins in the end then.

“Jane the Virgin” airs Wednesdays at 9/8c on The CW.