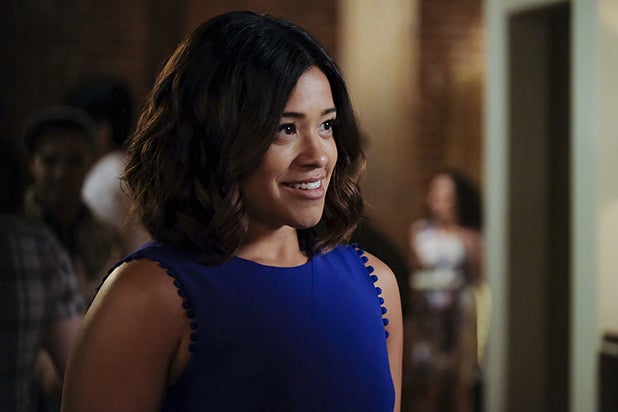 (Spoiler alert: Do not read on if you have not watched Monday’s episode of “Jane the Virgin.”)

“Jane the Virgin” went easy on the flashbacks of the immediate aftermath of Michael’s death in the first episode since the show jumped ahead three years into the future.

That’s to say, we only got one brief glimpse of a mourning Jane (Gina Rodriguez) having trouble getting out of bed two weeks following Michael’s (Brett Dier) death.

But, as showrunner Jennie Urman told TheWrap, this was designed so the show can keep revealing more about the moments following his death and the missing years in the episodes going forward.

“We go back to the three years we skipped throughout this season, so it’s not something we wanted to do all at once,” she said. “I really wanted to come in three years later with the feeling that everybody’s in a new place, for the audience to feel like the show still has that buoyant, light quality. We really handpicked those moments where she goes back and thinks about Michael and we think about Michael so that they’ll be more impactful when it comes up.”

Also Read: 'Jane The Virgin' Showrunner on Shocking Twist: 'A Decision Made Very Early On'

Urman also discussed the new character dynamics that have been revealed in the three-year time jump and how confident she is that she’ll get to the eventual endgame for the show she has in mind.

Will we see more of the immediate aftermath of Michael’s death, like his funeral?
You’ll see a little bit of the funeral in the next episode.  And you’ll see different moments from Jane’s  recovery throughout the season.

Do you know exactly what happened in the three years we skipped or did you approach the time-jump in terms of where you needed the characters to be in the present in order to tell the story going forward?
Both, I would say. We haven’t mapped out every single day of those three years, but we know the big moments for all of them, so we can go back to those touchstones as we unwind the rest of the season. We have a timeline and moments we know certain moves happen, that will become more relevant, and we’ll start to show you more of as the season goes on.

Michael’s death was very clearly foretold by the narrator. Have there been any other hints dropped about things to come that maybe people have missed?
There are hints throughout the show of various things, but we kind of put them in there and we like to see who picks up on what. That was the biggest one we were foreshadowing. The rest, you have to watch closely.

Is there another big foreshadowing moment coming?
There is not another big giant life-changing event coming up for Jane, no. It’s more the narrator, who he is, things about him; those are the things if you watch closely, you might start to pick up on.

Speaking of the narrator, he says “I totally forgot about her” in regards to Rafael’s (Justin Baldoni) new girlfriend (played by Minka Kelly). What can you say about her character?
She’s someone he’s been dating for about a year, and she’s someone that both Jane and Petra (Yael Grobglas) like, so that’s saying something. You’ll see that she and Rafael got together at a very specific moment in his life, and you’ll start to see more of their relationship as we continue forward.

Also Read: 'Jane the Virgin' Tackles Abortion Debate: 'There Was No Other Choice'

Jane calls Rafael her best friend and texted him instead of her mom during a moment of crisis at her reading. Is this just a natural progression of their relationship or is she not as close to her family anymore for some reason?
No, she’s still very close to her family. But Rafael was really there for her after Michael’s death, and after he got back from prison, they really hit just a great friendship and parenting groove. So it’s not that she’s not close to her family, it’s just that she’s older and she’s very close to the father of her baby now.

Jane, Rafael and Petra are this little family now. How long can they maintain that?
They have a Saturday morning tradition now, as we find out, and it is like they are a family. It’s not like everything is easy. Jane and Petra are still very different people, very different struggles. But they have made a pact to be there for each other through the most difficult of times. So they’re closer, but they also still have their tensions and anxieties. But underneath it all, they’ve accepted that they’re family to each other now and they’ll be there for each other.

I don’t think anyone would have been shocked if that had been Rogelio (Jaime Camil) and Darcy’s (Justina Machado) real wedding. They were getting along so well last we saw them. Why the fake out?
In the next episode, we’ll learn a little more about them and why their relationship turned so bitter. I just love Justina and I love her and Jaime together, so that’s a relationship and a dynamic and a character we’ll keep exploring.

This time jump kicks off “Part Three” of the “Jane the Virgin” story. Do you know exactly how many episodes you’ll need in order to tell the rest of the story, and how confident are you that you’ll get the chance to do it?
I know what I need, and I hope that I’ll get to tell it. I feel pretty confident about it, but I have to talk to everybody about the timeline.