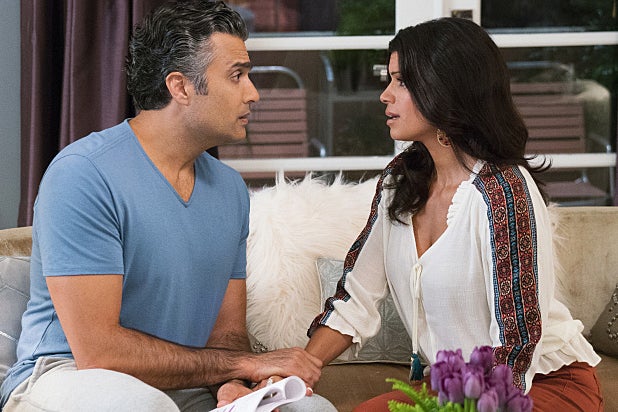 (Spoiler alert: Do not read on if you have not watched Monday’s episode of “Jane the Virgin.”)

“Jane the Virgin” may have given Xo (Andrea Navedo) a not tortured, matter of fact choice to have an abortion, but that doesn’t mean everyone in the Villanueva household was going to be so cool about it.

Much of Episode 2 of the CW show’s third season dealt with Xo’s decision, subsequent attempt to hide her decision from her mother Alba (Ivonne Coll) and the fallout when the devoutly Christian, pro-life matriarch inevitably finds out.

“I’m an optimistic and empathetic person, and everybody’s choices are different, and if we can just respect each other’s choices, wouldn’t that be a nice thing?” showrunner Jennie Urman mused to reporters on writing the Xo/Alba conflict, following a screening of the episode. “I think that was something important for the series, which has had some accidental pregnancies.”

The show previously had the characters of Jane (Gina Rodriguez) and Petra (Yael Grobglas) both decide to go through with having babies after finding themselves accidentally impregnated. But after firmly establishing Xo’s resistance to the idea of becoming a mother again in Season 2, that was never on the table this time around.

“If Xo were to have that baby, that would be a really strong message that I did not want to send — which is that a 40-something woman who has raised a child and doesn’t want a baby should have it anyway,” Urman continued. “And we had a character in the house that thinks quite the opposite. I think that lets us have a discussion about it, instead of discounting that point of view. Giving value to it as Alba’s point of view, but then showing a way out of it, for this family. It’s a way of looking at it within the microcosm of the family, where people have different points of view and how they can push forward. Alba says, ‘I wish you didn’t do it, but it’s your choice.’ And they move on.”