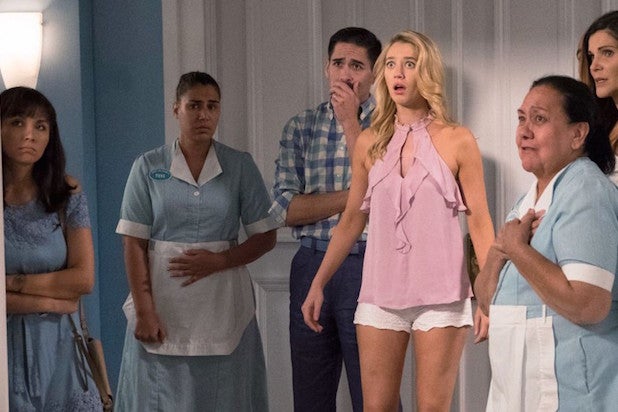 Spoiler alert: Do not read ahead unless you’ve watched the Nov. 17 episode of “Jane the Virgin.”

Any “Jane the Virgin” fan can tell you The CW show’s plot is full of twists and turns and shocking reveals. In fact, it’s so riddled with explosive moments that star Yael Groblas joked the level of secrecy surrounding the scripts is so intense they might as well call it “Jane of Thrones.” (Get it? Good.)

Of course, Grobglas has had to be more tight-lipped than usual recently, as the last episode of Season 4 of the telenovela-style series ended with her character Petra discovering her other character Anezka, dead, hanging from the ceiling. (Though the narrator warned “she didn’t kill herself.” Hmm.) So, looks like Grobglas isn’t portraying twins anymore. Well, at least not for now.

“I can’t confirm anything,” Grobglas tells TheWrap of the status of her dearly departed double. “I can’t assume to make those decisions.” But, for now at least, Grobglas is playing things like she’s only Petra.

“It’s like saying goodbye to a friend, but I’m hopeful there’s more there. Like flashbacks, or who knows?”

That’s definitely not out of the question for a show that has pulled a fast one on fans many times over the years. Though that didn’t make learning about Anezka’s death any easier for Grobglas.

“I got a call from [“Jane the Virgin” showrunner] Jennie [Snyder Urman]  about two episodes before,” Grobglas says. “It was, you know, by nature I’m always terrified I’m gonna get killed of and I kinda felt I had a safety net because I play two characters. So I thought I have higher chances of sticking around. And I want to, cause this is the best gig in town. So she texted me and was like, ‘Hi, can we get on the phone? No worries.’ I freaked that I was dying. And then she told me one of my characters is dying.”

Grobglas had grown very fond of Anezka since taking on the additional role in Season 2, which was a “complete surprise” and initially she thought she was being killed off then when she heard she had a big plot twist coming. (Guess she was kinda right — but way ahead of herself). In fact, she based the character off one of the closest “people” to her.

“She’s got personal space issues,” Grobglas says of Anezka. “And when I first read the script and saw everything that Anezka is I thought, ‘I know this person. It is my cat!’ He was the closest thing I had. He squeaks and growls.”

Grobglas will also miss the fun logistics of playing twins.

“You don’t actually think about the complications behind on it,” Grobglas says. “I’m pretty spoiled by my fantastic cast mates and being able to play off their reactions and play off what they bring to the scene and it’s so fun. But then, oh, wait it’s all me now! And I don’t have anyone to play off of. I have to decide ahead of time how I’m going to do it. And sometimes they are filmed a week apart. So now I have to decide what I’m reacting to as Anezka a week after being Petra. It’s a lot of fun.”

We’ll stay tuned to see if Grobglas will be running lines with herself again, any time soon.