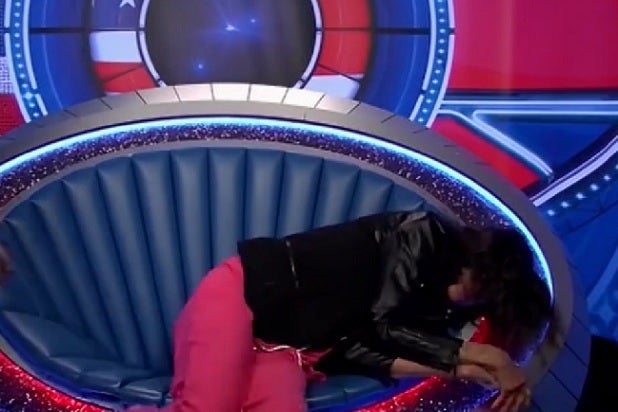 Supermodel Janice Dickinson had a less-than-perfect moment on Tuesday’s episode of “Celebrity Big Brother,” when she collapsed after an apparent bee sting.

During the episode, Dickinson tells producers that she’s been stung by a bee and that she’s allergic to bee stings. The 60-year-old is seen begging for a Benadryl shot or an EpiPen to quell the symptoms.

“My finger’s swollen and it’s going up my wrist,” Dickinson complains in the video. “I don’t want this to get into my heart.”

Telling producers that she can barely swallow and that her fingers are “turning black,” Dickinson appears to go into convulsions and eventually collapses in the clip.

The new season of “Celebrity Big Brother,” which premiered on England’s Channel 5 last week, has already seen its share of tumult. Shortly after the season debut, former MySpace sensation Tila Tequila was axed from the show after pro-Hitler comments that she made on social media in 2013 were brought to light.

According to TMZ, Dickinson was rushed to the hospital and returned to the “Big Brother” house after being treated, but she “almost died” from the ordeal.

Watch Dickinson grapple with the bee sting in the video.