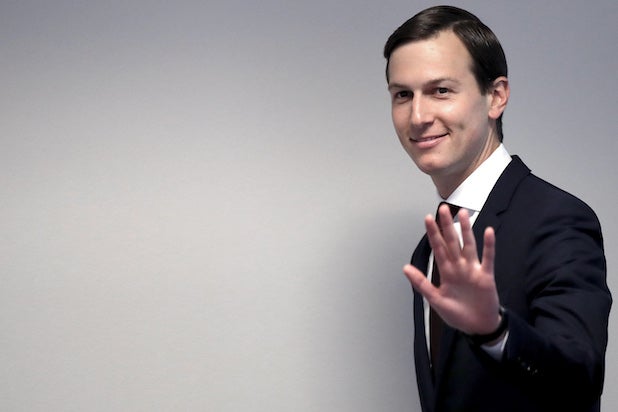 During an off-the-record Q&A with a group of congressional interns on Monday, White House senior advisor Jared Kushner was bragging about how none of his Middle East negotiations have been leaked to the press.

“So if you’ve noticed about this conflict, and [unintelligible] nothing’s leaked out,” Kushner said, according to a recording of the conversation obtained by WIRED. “So nothing has leaked out, which I think gives the parties more trust, and more ability to really express and share their viewpoints.”

“I’m a lot more comfortable talking to you guys today ’cause there isn’t any press,'” Kushner went on to say … right before his comments were leaked to the press.

Kushner also told the interns that, “They thought we colluded, but we couldn’t even collude with our local offices.” He also weighed in on his security clearance form, where he initially failed to report more than 100 contacts, telling the interns that “there are only two [pages] you guys have to worry about,” Foreign Policy reported.

“Make sure you guys keep track of where you travel,” he added.

The comments were leaked despite the fact that deputy staff director of member services, outreach and communications Katie Patru warned the interns ahead of time that “to record today’s session would be such a breach of trust, in my opinion. This town is full of leakers, and everyone knows who they are, and no one trusts them.”

The chat with the interns also revealed that Kushner — a 36-year-old real estate developer and political novice — admitted “there may be no solution” to the the Middle East conflict.

“So, what do we offer that’s unique? I don’t know,” Kushner told the interns.

For months, President Trump has been frantically pursuing White House leakers with little success. The president has vowed to put an end to what he called “illegal leaks.” It’s been such an issue for the administration that recently ousted communications director, Anthony Scarmucci threatened to kill leakers during his now infamous chat with The New Yorker reporter Ryan Lizza.

“What I want to do is I want to f—— kill all the leakers, and I want to get the President’s agenda on track so we can succeed for the American people,” Scaramucci told Lizza.

The Justice Department is expected to announce a major crackdown on leakers this week, as John Kelly takes over White House operations as chief of staff. Stopping the flurry of leaks is perhaps Kelly’s most urgent task.

“If Reince [Priebus] couldn’t control those leaks … then he was the one who was ultimately responsible, and General Kelly was brought in to make sure those leaks do not continue,” former Trump campaign manager Corey Lewandowski told “Fox & Friends” on Tuesday.

A report written by senate Republicans on the homeland security panel concluded that the Trump administration faced an “alarming” amount of media leaks, about one per day.

The report went on to urge the Justice Department to step up its investigations into the leaks.

“Under President Trump’s predecessors, leaks of national security information were relatively rare, even with America’s vibrant free press,” the report said. “Under President Trump, leaks are flowing at the rate of one a day, an examination of open-source material by the majority staff of the Committee on Homeland Security and Governmental Affairs shows. Articles published by a range of national news organizations between January 20 and May 25, 2017 included at least 125 stories with leaked information potentially damaging to national security.”

According to the report, leaks with the “capacity to damage national security” flowed about seven times faster under President Trump than during President Obama’s and President George W. Bush’s first 126 days.”