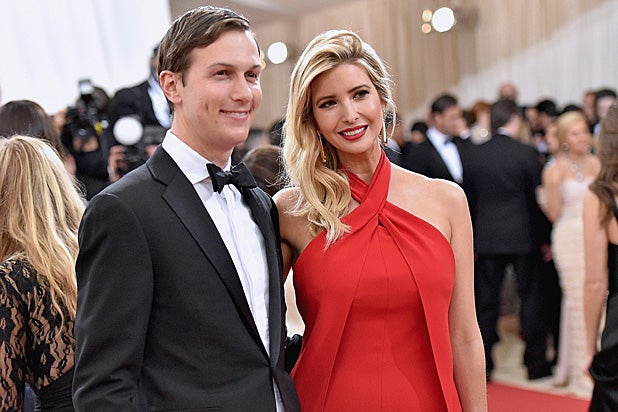 After New York Observer owner Jared Kushner got taken to task by one of his paper’s own writers, he tried to take back a statement to TheWrap that defended his father-in-law, Donald Trump.

The controversy centers around the presumptive GOP presidential candidate’s recent tweet about his rival, Hillary Clinton, which featured a six-pointed star and a pile of cash, prompting the Observer’s entertainment writer to call out Kushner — who was raised in an Orthodox Jewish family — for supporting Trump.

In a statement to TheWrap sent at 3.30 p.m. PT Tuesday via his spokesperson, Kushner said: “My father-in-law is an incredibly loving and tolerant person who has embraced my family and our Judaism since I began dating my wife. I know that Donald does not at all subscribe to any racist or anti-semitic thinking. I have personally seen him embrace people of all racial and religious backgrounds. The suggestion that he may be intolerant is not reflective of the Donald Trump I know.”

However, Kushner’s rep then called our reporter and verbally asked that the statement be rescinded, a request which was declined.

The statement was in response to an open letter published in the Observer by entertainment writer Dana Schwartz, who slammed Trump’s for having “anti-Semitic imagery” by depicting Clinton beside the words “Most Corrupt Candidate” superimposed over a six-pointed silhouette resembling a Star of David atop a background of $100 bills. Though Trump claimed the symbol was a sheriff’s star, his account deleted the tweet and republished the image with a circle instead.

“People can play ignorant, blame the corrupt liberal media for trying to ‘get’ Trump, but it takes only a basic knowledge of world history or an understanding of how symbols work to see a wall of cash, a Star of David, and the accusation of corruption and not see the subtext,” Schwartz wrote.

She also included a gallery of anti-Semitic tweets she received after tweeting out her response to the meme, and highlighted efforts by Trump’s supporters to point out the fact that his son-in-law’s Jewish heritage as proof that the candidate is not anti-Semitic.

“Please do not condescend to me and pretend you don’t understand the imagery of a six-sided star when juxtaposed with money and accusations of financial dishonesty. I’m asking you, not as a ‘gotcha’ journalist or as a liberal but as a human being: how do you allow this? Because, Mr. Kushner, you are allowing this,” Schwartz wrote. “When you stand silent and smiling in the background, his Jewish son-in-law, you’re giving his most hateful supporters tacit approval.”

Kushner — who is married to Trump’s daughter Ivanka — has become increasingly involved with Trump’s campaign, becoming almost its unofficial manager. In addition to helping recruit a new director of communications, Kushner has drafted several of Trump’s policy speeches, led the creation of an online fundraising system for the campaign, and is aiding the candidate in selecting a running mate, according to the New York Times.

The 35-year-old is the son of American real estate developer Charles Kushner. In July 2006, Kushner purchased the Observer for $10 million, using money he says he earned during his college years by closing deals on residential buildings in Cambridge, Massachusetts, with family members providing the backing for his investments. He married Ivanka in a Jewish ceremony in 2009 and the couple now have three children.