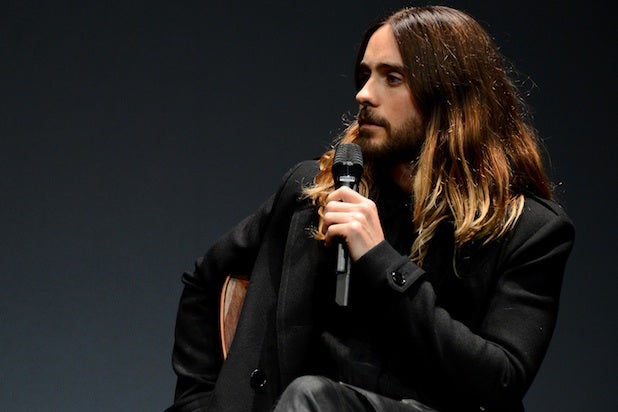 “Dallas Buyers Club” actor Jared Leto was heckled on Tuesday night in Santa Barbara by an audience member who yelled that as a man, Leto didn’t have the right to play a transgender character.

But before the brief and awkward exchange was over, Leto had invited the heckler to continue the conversation backstage – which they did as soon as Leto left the stage during the “Virtuosos” tribute at the Santa Barbara International Film Festival.

Leto was honored with the SBIFF award alongside June Squibb from “Nebraska,” Michael B. Jordan from “Fruitvale Station” and Brie Larson from “Short Term 12.” Not only did he get the loudest reaction from the audience when he was introduced by moderator Dave Karger, but his arrival onstage prompted shouts of “We love you!” and “We love Rayon!,” the latter a salute to his trans character in “Dallas Buyers Club,” for which he won an Oscar nomination.

The actor immediately stopped and asked the audience member – who witnesses said appeared to be a transgender woman – to clarify the comments.

“You’re a man!” the heckler shouted. “You shouldn’t play a transgender role!”

Leto, who appeared to be genuinely interested in and never irritated by the heckler, gently suggested that the logic would also prevent gay actors from playing straight roles, “You’ve made sure that people who are gay, that the Rayons of this world should never be able to turn the tables,” he said, to applause from the audience.

He then invited the heckler to continue the conversation after the onstage interview. “The door is open,” he said.

During his interview with Karger, Leto spoke of touring with his band Thirty Seconds to Mars and meeting a 14-year-old German boy who had been born a girl, and how that inspired the character of Rayon.

“To me, I thought it was an opportunity to put a different kind of character onscreen,” he said.

And when he finished his onstage interview, Leto immediately pointed into the audience and motioned for the heckler to meet him backstage. There, they had what one witness described as a “heart-to-heart” talk.

The exchange grabbed in the spotlight in an evening that might otherwise have been notable for its no-shows. Before Oscar nominations came out, the festival announced that its “Virtuosos” panel – an annual tribute devoted to actors who’ve given breakout performances in the past year – would honor an unprecedented seven people: Leto, Jordan, Larson, Squibb, Daniel Bruhl from “Rush,” Adele Exarchopoulos from “Blue is the Warmest Color” and Oscar Isaac from “Inside Llewyn Davis.”

Of the seven, only Leto and Squibb received Oscar nominations. And of the five who didn’t get nominated, only Jordan and Larson showed up on Tuesday. Bruhl, Exarchopoulos and Isaac begged off, citing their work schedules.

Similarly, Emma Thompson, who was scheduled to receive the festival’s Modern Master Award on Saturday, opted to remain in rehearsals for “Sweeney Todd” after failing to land an Oscar nomination. (Had she been nominated, she was planning to take a couple of days off to attend the Santa Barbara tribute and the Oscar nominees luncheon.)

In addition to Jordan and Larson honoring their commitment despite the lack of nominations, the surprise Oscar omissions Oprah Winfrey and Robert Redford are both going through with planned SBIFF tributes this week.

During the other interviews on the Virtuosos program, Jordan talked of how he’d built a relationship with the family of Oscar Grant, the young father from Oakland who was shot and killed by a transit officer on New Year’s Eve, 2009, and who Jordan played in “Fruitvale Station.”

“That’s a relationship that doesn’t go away after awards season,” he said.

Also read: ‘Fruitvale Station’ Director: My Story of an Inner-City Killing Is About Humanity, Not Politics

Larson talked of preparing for her intense role as a counselor for abused teens in “Short Term 12” by drinking lots of coffee and listening to lots of “Norwegian black metal, death metal” music.

And the 84-year-old Squibb got a big laugh when asked if there was anything her hilariously blunt and profane character said in “Nebraska” that made her uncomfortable. “Not a thing,” she said with a smile.

She also spoke of Philip Seymour Hoffman, with whom she’d worked in “Scent of a Woman,” one of his first movies. “He was just very sweet,” she said. “It’s so hard to know that he must have had so many demons.”

At the end of the night, when all four actors received their awards from actor Christopher Lloyd, Leto took the microphone again.

“I do want to dedicate this tonight to the late, great Philip Seymour Hoffman,” he said. “A brave and fearless genius – someone who was a compass for all of us, and someone who will really be missed.”