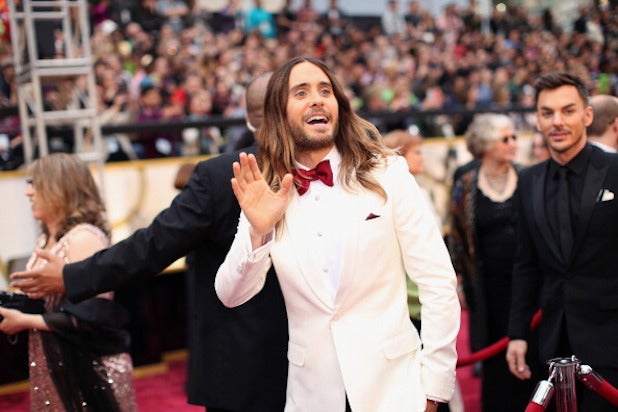 Jared Leto set a high bar for every other winner Sunday night at the Oscars, delivering a heartfelt speech after winning for Best Supporting Actor.

Leto recounted the tale of how his mom, a teenage girl who had two children in rural Louisiana, raised two sons on her own. Those kids grew up to be Leto and his brother, Shannon — Leto’s bandmate in 30 Seconds to Mars.

“She encouraged her kids to be creative and work hard and do something special,” Leto said, thanking his mom for “teaching me how to dream.”

Leto has won countless awards over the past several months for his performance in “Dallas Buyers Club,” but this time, he threw in a few touching wrinkles, including references to ongoing conflicts in Ukraine and Venezuela, and the AIDS crisis.

“This is for the 36 million people who have lost the battle to AIDS,” Leto said. “And to those of you who have ever felt injustice because of who you are and who you love, I stand here in front of the world with you and for you.”

While Leto may have echoed parts of this speech at previous awards ceremonies this year, no one has tired of it. Here’s what Kevin Smith tweeted:

“Leto thanks his Mom during a touching speech. Thank God I’m already married, as the guy just stole every woman’s heart. Guys too.”