“Wait until you see the way he looks, what we have done with this character, you will love it,” producer Avi Arad said to Deadline. “There are so many other great characters on the way, too. You will see. We’re just getting started.”

Check out the photo below. 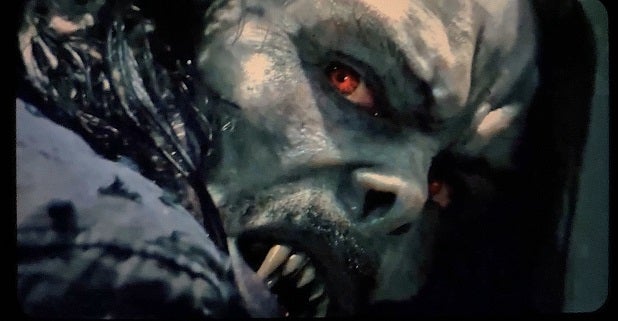 The fan reaction online has been overwhelmingly positive thus far. Check out some reactions.

Ok sony you have my attention now #Morbius pic.twitter.com/LmhvYu4g35

Now That's What I Call A True Masterpiece #Morbius pic.twitter.com/TAeMRS9eYK

To be honest I wasn't hyped for Morbius.

But after seeing this. I'M SO HYPED THATS IT CHIEF. pic.twitter.com/VrcABqPRl3

“Morbius” is one of several projects being developed by Sony based on characters from the “Spider-Man” comics. The franchise paid dividends for the studio in 2018 with “Venom,” which grossed $855 million worldwide, and “Spider-Man: Into the Spider-Verse,” which grossed $327 million and earned a Best Animated Feature Oscar last year. Both films have sequels in the works.

Daniel Espinosa directed “Morbius” from a script by Matt Sazama and Burk Sharpless. Avi Arad, Matt Tolmach and Lucas Foster produced the film with Palak Patel overseeing for the studio.

He must digest blood to survive and has a strong aversion to light, like most vampires. But he also has the ability to fly, has superhuman strength, speed and healing abilities. His bite tends to be lethal, but his victims do not necessarily become vampires themselves.

10 Best Non-Superhero Comic-Book Movies of the 2010s, From 'Atomic Blonde' to 'Snowpiercer' (Photos)

Decade in Review: ”Scott Pilgrim vs. the World“ and ”The Wind Rises“ rank among the highlights of the decade

Superhero movies, it has been (accurately) said, rule the box office. Although billions of dollars are made every year adapting comic books about costumed vigilantes, there is a whole universe of comic-book storytelling that frequently goes unexplored. Human dramas, light comedies, sci-fi and action comics alike, these works are frequently brought to the screen but sometimes overlooked by mainstream audiences who equate comics with the superhero genre. We were paying attention. These are the non-superhero comic book films that moved us and thrilled us this decade.