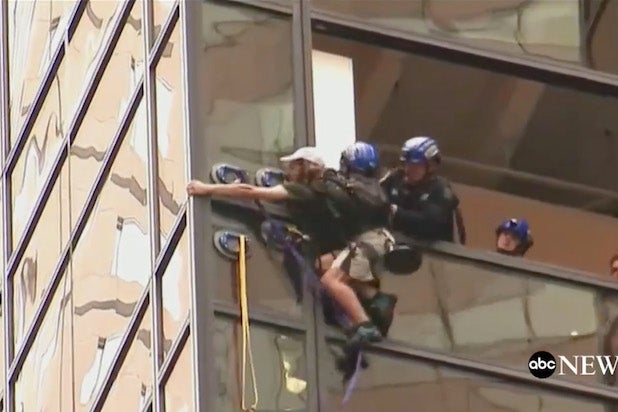 Jared Padalecki has a message for his fans: No, he did not spend Wednesday scaling the side of Trump Tower in New York with the aid of suction cups.

The “Supernatural” star felt compelled to set the record straight on Facebook, after a man with a resemblance to Padalecki enthralled the nation with his bizarre ascent.

“To clear things up, this is NOT me trying to scale the Trump Tower in NYC,” Padalecki wrote in a caption accompanying a photo of the climber. “I am safe and sound in Vancouver filming ‪#‎Supernatural‬. So please stop asking.”

Don’t get Padalecki wrong, however; the actor noted on his Twitter account that he stands in solidarity with the daredevil, who he dubbed “BizarroJarpad.”

“I would like to wish #BizarroJarpad the best of luck in climbing the Trump Tower,” Padalecki wrote.

The actual climber, who was identified in initial reports as simply Steve from Virginia, was removed from the side of Trump Tower by police at approximately 6:30 p.m. ET after responders broke a window above him. The climber is believed to have begun his ascent more than two hours earlier from a terrace on the fifth floor of the building.

In a video posted to YouTube on Tuesday, a man who appeared to be the climber said that he was scaling the building to get the attention of GOP presidential nominee Donald Trump, who he said he supports

“If I had sought this via conventional means, I would be much less likely to have success, because you are a busy man with many responsibilities,” the man said.

Congratulations on getting somebody’s attention, Building-Climbing Guy. But you’re still no Jared Padalecki.

I would like to wish #BizarroJarpad the best of luck in climbing the Trump Tower. #??? pic.twitter.com/NsfsjLGKgm