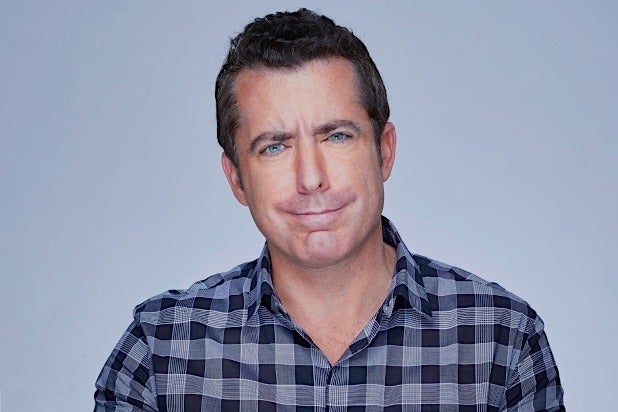 The picturesque state of Alaska may be “The Land of the Midnight Sun” and home of a rather famous nearsighted, moose-hunting maverick of a former vice presidential candidate, but it’s also the setting for Season 3 of the Jason Jones-lead TBS comedy “The Detour.”

Jones not only stars in the show, he also produces, directs and writes it. And not just the scripts — he also writes the lyrics for its original songs. Although he hasn’t tackled stocking the Craft Services table just yet, it’s not off his radar.

“I do love to cook, so you never know,” he joked to TheWrap.

In a nutshell, “The Detour” is about a family of four who are constantly on the move and, because they are on the run from the postal inspection service (don’t ask), are trying to settle down in the last place anyone would look for them — in the “state of misfits,” a.k.a. Alaska.

Also Read: Jason Jones Reveals How 'The Detour' Borrows From His Own Life

“We have a new location we shoot in every year. They all have very distinct looks over the seasons, and we use a different director of photography to achieve a different look,” Jones said.

Although Alaska has a very distinct personality of its own and fits in perfectly with this season’s long story arc, it’s also a place Jones is familiar with.

“I had been up to Alaska a fair amount when I was on ‘The Daily Show’ to cover a ‘certain governor,'” he grinned, referring to, of course, Sarah Palin. Jones spent 10 years as a correspondent working alongside his wife, Samantha Bee, on “The Daily Show” during the Jon Stewart era. By the end of 2015, he had 118 in-the-field segments to his name, a show record.

Back to Alaska — Jones was “AMAZED” at the people up there. And, yes, he said it with enough zeal to put it in all caps. “We went out to a bar in Fairbanks after a long day of covering ‘said governor,'” Jones said. “It was a biker bar but it was also younger hippie Millennials, and there were yuppies in there, too. It was a mix of people you would never see in any other bar, in any other city.”

His character, Nate, has an opinion of Alaska that’s a tad different: “If you’re not born here, you’re certainly running from something,” Nate says in tonight’s episode. “It’s a place you go to disappear.”

Huskies, moose, glaciers and the Iditarod aside, Jones couldn’t shoot an entire season set in Alaska without filming what the state is most noted for: the Palin family. Jones reached out to them, and they reached back — Sarah’s husband Todd even has a role in an upcoming episode.

He plays the referee of a kids’ hockey game, who gets into a brawl with an intense coach, played by Jones. “He makes a bad call, and they end up fighting,” Jones said. “As we’re tussling, I threw in the line, ‘I’ve been to your house, Todd! You can’t see Russia!’ And then [Todd] threw back the line, ‘She never said that!'”

Jones later asked Palin if he was cool with that adlib. Palin smiled and answered, “Yeah, you got your joke in.”

“From what I hear,” Jones added, “[Sarah] thought it was funny.”