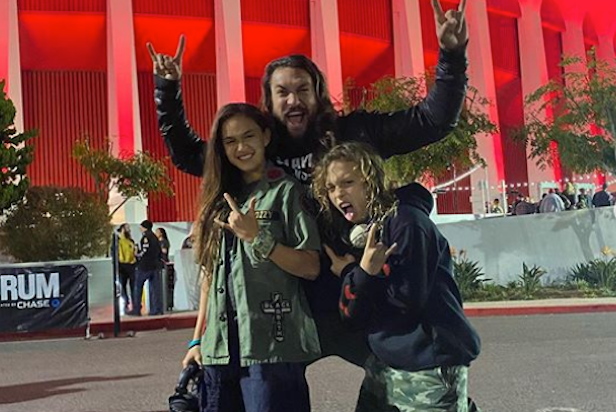 It probably won’t surprise anyone that Jason Momoa — a.k.a. Khal Drogo, a.k.a. Aquaman — is a devoted metalhead. So when he showed up at The Forum in Los Angeles on Saturday night for Slayer’s farewell concert, he didn’t pass up the chance to sing a Pantera classic with Phil Anselmo.

Anselmo was one of the opening acts for the thrash metal legends, performing alongside his post-Pantera solo band, The Illegals. During the set, Momoa, who was attending the show with his two kids, joined him onstage while he was performing Pantera’s famous ballad “This Love” from their biggest album, “Vulgar Display of Power.”

The Ian’s and the Momoa’s got nothing but LOVE for Philip and the Illegals at the Forum last night. @prideofgypsies @philiphanselmo @panteraofficial #thislove

“DROGO wouldn’t exist if there wasn’t Pantera,” Momoa wrote on Instagram. “I was living out my childhood dreams. I am so thankful for those moments shared with dear friends and my babies.”

After performing, Momoa went backstage to take pictures with Slayer, as well as Metallica and Anthrax guitarists Kirk Hammett and Scott Ian and Primus frontman Les Claypool. In past interviews, Momoa has said that bands like Metallica helped him get into character on the set of “Game of Thrones” and “Aquaman.”

Also Read: Jason Momoa Has No Time for Your Crappy Pumpkin Carvings (Video)

“It’s crazy to think of Slayer and Anthrax and Metallica as ohana but they are. Love you guys,” wrote the Hawaiian actor. “And to finally meet Les Claypool was legendary…mahalo nui for your music and endless inspiration.”

Slayer played a 20-song set at the Forum to bring an end to a career that has spanned 12 studio albums over more than 35 years. After concluding with the opening track off their “Reign in Blood” album, “Angel of Death,” guitarist Kerry King dropped the heavy chain belt he wears while performing in the middle of the stage. After the rest of the band left, frontman and bassist Tom Araya remained alone onstage to soak in the cheers from the rabid sold out crowd.