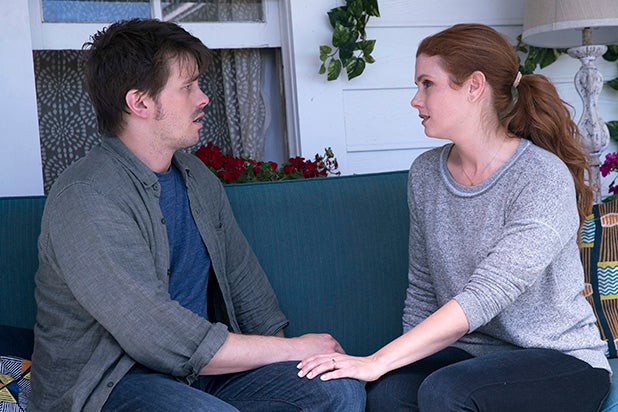 Well, actor Jason Ritter was right when he told us he didn’t think his new dramedy, “Kevin (Probably) Saves the World,” would be canceled. In fact, the freshman series just got an additional three episode order from ABC.

But does that mean the show, which has struggled in Nielsen ratings, is safe for good? Definitely not.

However, Ritter told TheWrap that he’s “definitely still optimistic” about the future.

“With a show like this, it’s kind of strange and hard to describe in a couple sentences, at least for me,” Ritter said on Nov. 6, a few days before the series was handed a trio of new episodes. “I think it really relies on word of mouth and people telling their friends, ‘Hey you should watch the show,’ ‘That doesn’t really sound like my kind of thing,’ ‘I know, but trust me. It’s really fun and it’s really funny.'”

Ritter told us the ratings may not be stellar, but he’s loving the response from fans.

“I’m used to seeing lots of mean people online and people being cruel and dismissive, and the response to the show that I’ve seen has been so overwhelmingly positive that it feels like it could be one of the shows that just needs some time to build,” he said. “And maybe over the winter break people are telling their friends to see it and that will help.”

“There have been lots of shows that didn’t start out great, but they gave it a shot and trusted the audiences will show up,” he continued. “Hopefully it’s not a situation where they go, ‘Well we didn’t get a huge hit show right off the bat’ [and cancel it]. Because most shows, even most hit shows, have humble beginnings.”

As far as how the mouthful of a title might be affecting the ratings, Ritter admits monikers are “always tough.”

“I don’t know what goes into making a title change or anything like that, but I think if people watch the show, then you know they’ll get over their fear of the title. And they’ll shorten it, like fans do with shows.”

Ritter says he’s not offering up any abbreviations, so may we suggest “Kevin PSTW”? That doesn’t mean anything weird, right?