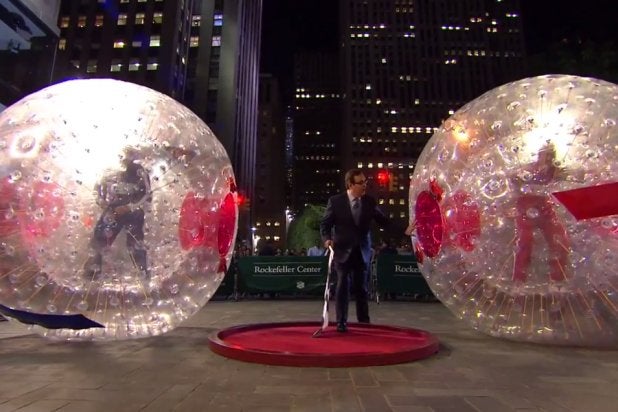 Jason Statham proved why he’s one of America’s favorite action movie stars in the most unlikely way possible. He handily took down Jimmy Fallon in a giant hamster ball race on Friday’s “Tonight Show.”

It was the first of what will surely be many such races, with the men literally diving into massive inflatable hamster balls.

Statham, who is 47-years old, had no problem diving into the ball, confidently getting to his feet, and then barreling — almost literally — down the plaza. Fallon, who is 39, was off of his feet and rolling around inside the ball almost immediately.

The track had them go down the plaza at Rockefeller Center, make a u-turn and come back to the starting point.

Also read: ‘The Expendables 3’ Review: Sylvester Stallone Gums Up the Works with a Dull Junior Auxiliary

The “Expendables 3” star was sure-footed, as he lapped Fallon, even staying on his feet during a collision. It wasn’t even close, but it certainly looked like the men were having fun.