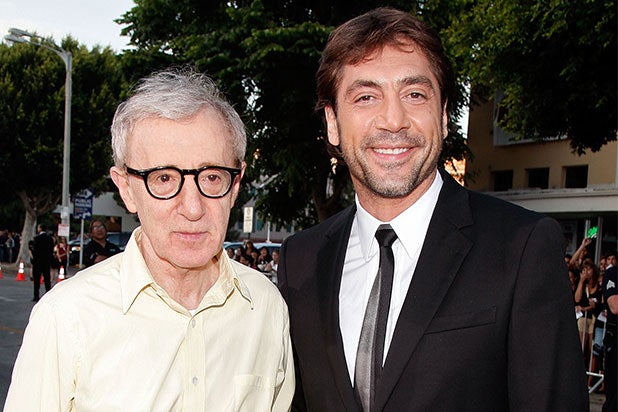 Javier Bardem has once again spoken out about the “public lynching” of Woody Allen in regards to the longstanding accusations of sexual misconduct against the filmmaker.

“At the time I did ‘Vicky Cristina Barcelona’, the allegations were already well known for more than 10 years, and two states in the U.S. deemed he was not guilty,” Bardem said at the Lumiere Festival in Lyon on Tuesday, according to The Hollywood Reporter. “If the legal situation ever changes, then I’d change my mind. But for now, I don’t agree with the public lynching that he’s been receiving, and if Woody Allen called me to work with him again I’d be there tomorrow morning. He’s a genius.”

In April, the Spanish actor said he was “shocked” by the treatment of Allen, and said that he was “absolutely not” ashamed to have worked with him on the 2008 film “Vicky Cristina Barcelona.”

“If there was evidence that Woody Allen was guilty, then yes, I would have stopped working with him, but I have doubts,” Bardem said at the time. “I am very shocked by this sudden treatment. Judgments in the states of New York and Connecticut found him innocent. The legal situation today is the same as in 2007.”

Several stars of Allen’s films have publicly said that they would not work with the director again in the wake of resurfaced accusations of sexual assault by his adoptive daughter, Dylan Farrow, and her mother, Mia Farrow. Among those are “Wonder Wheel” actor David Krumholtz, who said he “deeply” regrets working with the filmmaker on his most recent film, calling it one of his “most heartbreaking mistakes.”

Greta Gerwig also said she will never work for Allen again and wouldn’t have starred in his 2012 movie “To Rome With Love” had she known about the accusations against him. Peter Sarsgaard, who starred in Allen’s 2013 film “Blue Jasmine,” said he would turn down another chance to work with the director.

Allen has denied Dylan Farrow’s sexual accusations, which he was investigated in 1992 but never charged, calling it an invention of Farrow’s mother, actress Mia Farrow. The accusations were brought back to the public’s attention when Farrow detailed her experience in an open letter in the New York Times in 2014.

In December, Farrow published an op-ed in the Los Angeles Times, in which she called out Kate Winslet, Blake Lively and Gerwig for working with Allen amidst the accusations.