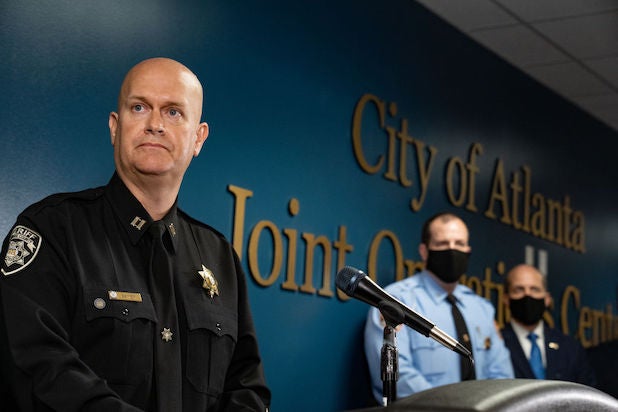 Captain Jay Baker, of the Cherokee County Sheriff's Office, speaks at a press conference following the shootings of eight people, six of whom were Asian women. (Megan Varner / Getty Images)

Captain Jay Baker, a spokesperson for the Cherokee County Sheriff’s Office who said the 21-year-old suspected of killing eight people at spas in the Atlanta area had a “bad day,” promoted racist T-shirts on his Facebook page that blamed China for the COVID-19 pandemic.

In a series of Facebook posts, Baker shared photos of T-shirts with the slogan, “Covid 19 IMPORTED VIRUS FROM CHY-NA.”  “Love my shirt,” Baker wrote in one April 2020 post. “Get yours while they last.”

“Place your order while they last,” Baker wrote in another post in March 2020, alongside a smiley face emoji.

Jay Baker did not immediately respond to a request for comment.

Earlier on Wednesday, following a mass shooting that left six Asian women and two others dead, Baker was criticized for describing the 21-year-old suspected murderer, Robert Aaron Long, as having a “really bad day.” (Long has been charged with four counts of murder and one count of aggravated assault in Cherokee County and four counts of murder in the city of Atlanta.)

The names of the victims killed at two other spas in the Atlanta area have not yet been released.