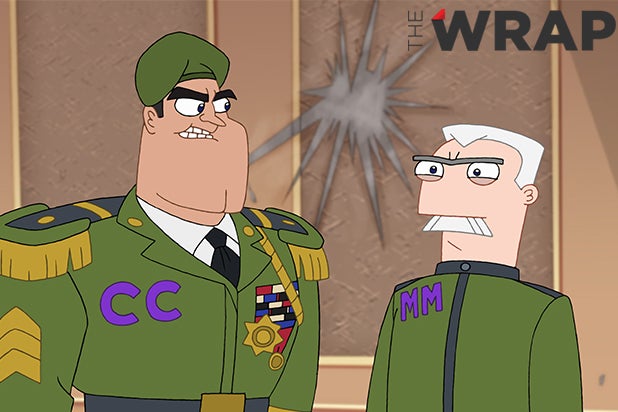 Nearly four months after leaving NBC’s “The Tonight Show,” Jay Leno is back on television and more animated than ever. The comedian lends his voice to an episode of Disney XD’s “Phineas and Ferb” airing Monday, June 9 at 10/9c.

TheWrap has the first look at Leno’s character, Colonel Contraction of the Organization without a Cool Acronym. The one-hour episode, “Phineas and Ferb Save Summer,” will follow Phineas, Ferb and the rest of their friends as they try to stop resident villain Heinz Doofenshmirtz from using his latest invention to move the Earth and jeopardize summer.

Leno is the first of several notable guest stars to appear on the Emmy Award-winning show’s summer season, including Elizabeth Banks, Jon Stewart and Simon Pegg.

Take a look at Leno as Colonel Contraction, on the left, above.

Can you see a resemblance?