A relaxed, confident and slimmed-down Jay Leno said he’s going into his new NBC primetime show without any fear of failure.

"If we go down in flames, we’ll be laughing (about it) on the way down," Leno told reporters Wednesday in his first major media appearance since stepping down in June as host of "The Tonight Show." 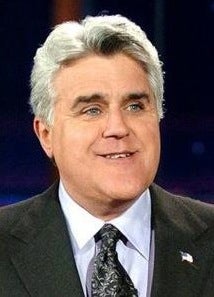 Leno said his calm demeanor, particularly compared to his early days as host of "Tonight," can be chalked up to one key fact.

Leno also took a pass when asked what he thought of David Letterman’s recent ratings surge, at least in total viewers.

"Not my problem!" he deadpanned.

He also insisted he wasn’t at all bitter about being asked to step down from "The Tonight Show."

"I’d rather be doing this than ‘The Tonight Show,’ " he said. "It’s more interesting; it’s more of a challenge…. I was getting a little complacent."

He admitted that he’d "like to (have hosted ‘Tonight’) a little longer.

"But there’s only so much pie you can have," he said.

Leno revealed some details of the new program, which debuts Sept. 14 on NBC, including plans to end each show with one of his signature comedy bits such as Jaywalking or Headlines.

Most shows will feature just one guest per night. They’ll open with a 10-minute plus monologue. As expected, there won’t be a desk, at least at the start of the show.

"I’m hoping we can make some stars," Leno said, adding that he’d like to find his eventual replacement.

Leno is also building a full-size racetrack next to his studio in order to mount what he’s calling "The Green Car Challenge."

Producers are in advanced talks with an American automaker to provide concept cars of the environmentally friendly variety; celebrities will then race in those cars to prove green cars can go fast.

As for guests, Leno repeated past pronouncements that he planned to compete heartily with other latenight hosts, including O’Brien, for guests. "We’ll fight tooth and nail with Conan to get a guest," he said. "It’s a game. You play to win."

Leno said he would try to make his new show as broadly appealing as possible.