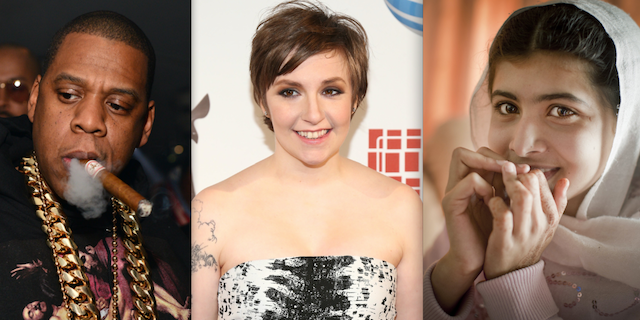 In a short piece accompanying Jay-Z's portrait, New York City Mayor Michael Bloomberg praises him as "an artist-entrepreneur who stands at the center of culture and commerce in 21st century America."

"In nearly everything he’s tried, he’s found success. (He even put a ring on Beyoncé.)," Bloomberg wrote. "And in doing so, he’s proved that the American Dream is alive and well.

Yousufzai, who survived a bullet to the head from a Taliban thug for trying to discourage Pakistani women from pursuing an eduction, joins "Girls" creator Dunham in Time's "icon" category.

"The Taliban almost made Malala a martyr; they succeeded in making her a symbol," Chelsea Clinton wrote of the 15-year-old activist.

"Homeland" actress Claire Danes argues that Dunham is also a symbol. If Yousufzai gives oppressed women the courage to educate themselves, then Dunham's honest (and frequently topless) portrayal of a 20-something New Yorker on her HBO comedy series empowers viewers to accept themselves, she said.

"Lena’s unique lack of vanity or shame allows us to consider that we may also be able to accept and express ourselves fully," Danes wrote. "This is not only impressive, it’s important. Because it turns out that girls don’t just want to have fun. They also want to be known for who they really are."

The "Silver Linings Playbook" star is hailed by Foster for both her talent and "her good-humored, ballsy, free-spirited alter ego," while Hamm calls Cranston's "fearless" portrayal of chemistry-teacher-turned-crime-lord Walter White "mesmerizing."

"Senator Rand Paul is a voice of reason awakening the public to what must be done to restore our prosperity and preserve the blessings of liberty for future generations," Sarah Palin wrote.