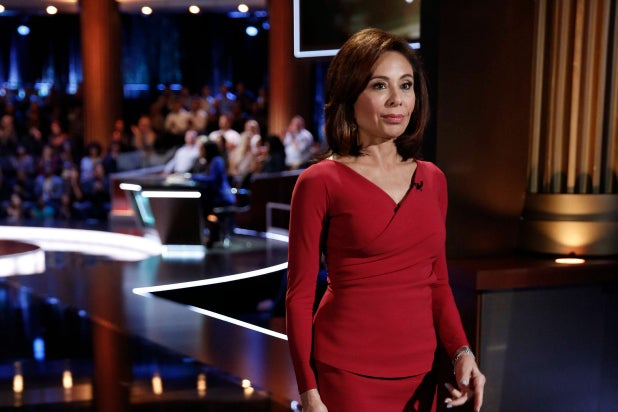 Jeanine Pirro on 'You the Jury'

She literally won’t be judging “You the Jury,” as the Fox News personality is actually hosting the Fox broadcast series instead. “Judge Jeanine” also isn’t judging the folks who choose to air their dirty civil cases on her new Friday show.

Here’s what Pirro told us when we asked what’s in it for the reality series subjects: “I think a lot of people go on television because they want to be vindicated,” she said. “The amazing part of this is that the Summation is done by the litigants. So they get to confront the person that they think has wronged them, or they get to answer to the person who is accusing them. And that in itself I think is a draw.”

“It’s the human condition, you cannot predict it,” she added. “And you cannot ascribe motives to people. It’s just too easy.”

Of course, there are also the damages. Those probably don’t hurt any motivation.

But who are some of these litigants, anyway, and what are their cases? Per Fox, the hot-button issues include online trolling and the limits of free speech, the constitutional clash of gay rights with religious freedom, or even whether someone’s death was the result of a tragic accident or something far more sinister.

In other words, “It’s not your run-of-the-mill daytime court show stuff,” Pirro explained, citing the classic “landlord-tenant or ‘He doesn’t pay child support'” cases one might see on “Judge Judy.”

“This is hardcore — some of it — stuff, that is very reflective of social issues that are literally in your newspaper on your kitchen table, or on your laptop or your iPhone,” she continued, invoking the “ripped from the headlines” phrase a few times.

Here’s how this whole experiment works. After a case has been presented during the East coast and Central time zone broadcast, “You the Jury” viewers get about five minutes to vote via text and the Fox Now App. The binding legal decision will be revealed at the very end of the episode. However, when the West Coast votes, if the cumulative votes (East/Central and West coast/Mountain time zone combined) lead to a different verdict, the original verdict will be overturned as the final outcome of the case.

Jose Baez, Benjamin Crump, Joseph Tacopina, Areva Martin, Mike Cavalluzzi and Charla Aldous will be the attorneys trying each case. Former judge of the Superior Court of California LaDoris Cordell will preside over the whole thing. And Pirro, well, she’ll be playing ringmaster to this whole circus.

“You the Jury” premieres Friday at 9/8c on Fox.