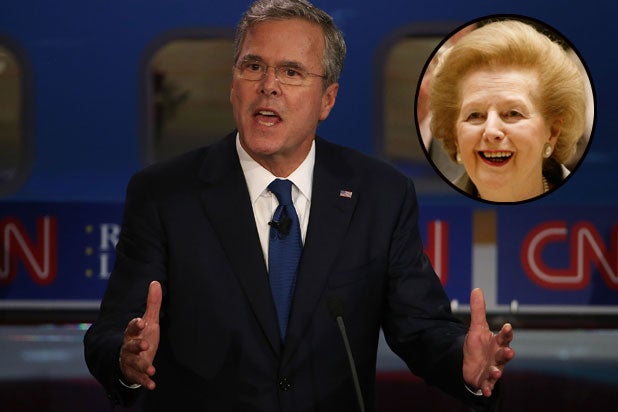 Those who stuck it out for almost three hours of debate between the Republican presidential hopefuls on Wednesday night were rewarded with a very strange moment from Jeb Bush.

All 11 candidates were asked which woman should be put on the revamped $10 bill when Alexander Hamilton is replaced in 2020.

His choice confounded many viewers watching on CNN, not only because Thatcher was not American but also because she was a very polarizing figure in politics as prime minister in the U.K. from 1979 to 1990.

The surprise pick quickly sparked both a confused and shocked reaction on social media from users confounded by the late head of the Conservative party being thrown into the GOP debate.

While another simply called it “the wrong answer in many ways.”

While a favorite of Ronald Reagan’s supporters, the longest-serving prime minister of the 20th century and the only woman to have held the office in Britain, Thatcher was hated by many in her home country for her uncompromising politics and leadership style.

She was nicknamed the “Iron Lady” (also the title of a 2011 biographical film starring Meryl Streep) and news of her death at 87 in April 2013 sparked the celebratory song “Ding Dong! The Witch is Dead.”

Jeb has retracted his previous pick of Margaret Thatcher. Imelda Marcos is his new choice.

What horrible event took place today to get Margaret Thatcher trending again? Please tell me she is still dead.

Jeb Bush wants to put Margaret Thatcher on the $10 bill. Kind of a slap in the face to every American woman ever. #GOPDebate

The GOP, Ann Coulter, South Park, and Margaret Thatcher are all currently trending in the USA. Today is the most conservative day on Twitter

Wait…Jeb! named MARGARET THATCHER as the woman he'd put on a $10 bill? Well, I guess if we're revising Reagan's legacy…

Hey remember that time Margaret Thatcher let Irish Hunger Strikers starve to death instead of give them a voice?

The saving grace for Jeb's Margaret Thatcher gaffe: Only 14 people are still watching this #GOPDebate

Margaret Thatcher is the wrong answer in so many ways.

.@JebBush says he'd put Margaret Thatcher on the $10 bill. Um, does he know who she was?! #AnotherDumbya

Jeb Bush was asked which American woman would he want on the $10 bill & he says Margaret Thatcher? Is it possible GW isn't the dumbest Bush?