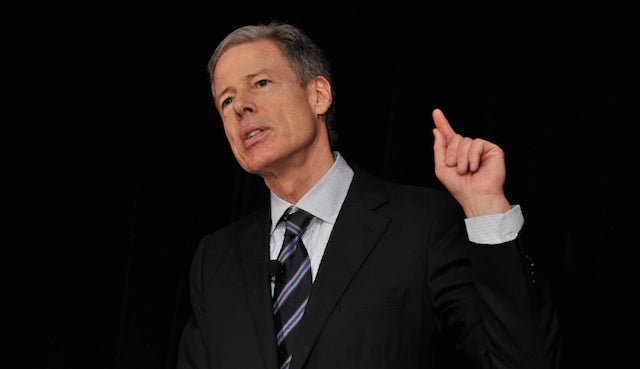 Time Warner CEO Jeff Bewkes testified on Wednesday in DC District Court, saying the Department of Justice’s assertion that a merger with AT&T would allow the mega-company to blackout pay-TV operators as a negotiating ploy is “ridiculous.”

“If our channels are not in distribution we lose lots of money (from subscriptions and advertising),” he said while defending the potential $85.4 billion merger against the government’s antitrust arguments, according to a Reuters report.

The DOJ had previously warned District Judge Richard Leon — the sole decider in whether the deal goes through — that a combined AT&T-Time Warner would allow the company to raise licensing fees and blackout pay-TV operators in the midst of negotiations.

Bewkes believes that makes no sense.

Also Read: Who Is Winning in DOJ's Case Against AT&T-Time Warner?

The Time Warner CEO offered up as evidence that less than 2 percent of subscribers jump ship in the event of a blackout, something that is not uncommon during carriage fee negotiations. Blackouts in pay-TV happen occasionally when operators and distributors can’t agree to terms.

Last week, economists for both sides argued over one of the lynchpins in the DOJ’s case against AT&T-Time Warner, which is an arbitration provision the companies agreed to.

The arbitration provision essentially says that AT&T won’t black out Time Warner channels during negotiations with carriers, and it requires the combined company to enlist an arbiter to use fair market value to determine prices for things like licensing fees.

So yeah, this blackout thing is a big issue.

Also Read: Here's Everything You Need to Know About the U.S. Gov's Lawsuit to Kill the AT&T-Time Warner Merger

But it’s not the only one — and Time Warner isn’t exactly without concern for the future itself.

The pending merger is in Time Warner’s best interest, Bewkes said today in court, and a way for the company to combat the impact it feels from the likes of Google, Facebook and other Internet companies.

Bewkes explained that Time Warner has been at a disadvantage in innovating and advertising because of the lack of granular information about the viewers that pay-TV and Internet companies have. You know, like the Facebook data news you simply cannot avoid these days.

The government has rested its case, but AT&T-Time Warner still have plenty left to say. The trial goes on.