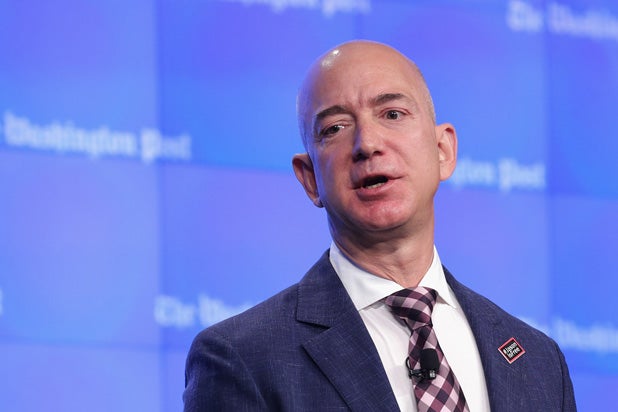 Amazon CEO Jeff Bezos on Thursday accused The National Enquirer of trying to blackmail him into dropping an investigation into how the tabloid obtained his personal text messages and photos with his reported mistress, Lauren Sanchez.

In a lengthy Medium post, Bezos said that people working for David Pecker, the chairman and CEO of the tabloid’s parent company American Media Inc., threatened to publish the intimate photos if he refused to cooperate.

Bezos went on to say that the tabloid tried to extort him and his security boss, Gavin de Becker, into issuing a public statement saying that AMI didn’t have a political agenda when it pursued the story about his affair.

“In the AMI letters I’m making public, you will see the precise details of their extortionate proposal: They will publish the personal photos unless Gavin de Becker and I make the specific false public statement to the press that we ‘have no knowledge or basis for suggesting that AMI’s coverage was politically motivated or influenced by political forces,'” Bezos wrote.

Also Read: Jeff Bezos Would Still Be World's 4th Richest Man Even If Divorce Claims Half His Net Worth

A rep for AMI didn’t immediately respond to TheWrap’s request for comment.

“Nothing I might write here could tell the National Enquirer story as eloquently as their own words,” Bezos wrote.

In one of the emails sent to de Becker’s lawyer, Marty Singer, AMI’s chief content officer Dylan Howard describes one of the photos as a “below the belt selfie – otherwise colloquially known as a ‘d-ck pick.'”

Last month, The National Enquirer published purported details of Bezos’ personal life, from before the Amazon CEO filed for a divorce from his wife. The Enquirer also published leaked text messages between Bezos and Sanchez.

Bezos hired an investigator to find out how the texts and photos found their way to the tabloid, and whether the publication was seeking revenge for reporting done by the Washington Post, which is owned by Bezos.

“Rather than capitulate to extortion and blackmail, I’ve decided to publish exactly what they sent me, despite the personal cost and embarrassment they threaten,” Bezos wrote.

AMI is being investigated for buying negative stories about Donald Trump for the purpose of burying them, a practice known as “catch and kill.”

Read AMI’s email, according to Bezos, below:

I am leaving the office for the night. I will be available on my cell — 917 XXX-XXXX.

However, in the interests of expediating this situation, and with The Washington Post poised to publish unsubstantiated rumors of The National Enquirer’s initial report, I wanted to describe to you the photos obtained during our newsgathering.

In addition to the “below the belt selfie — otherwise colloquially known as a ‘d*ck pick'” — The Enquirer obtained a further nine images. These include:

· Mr. Bezos face selfie at what appears to be a business meeting.

· Ms. Sanchez response — a photograph of her smoking a cigar in what appears to be a simulated oral sex scene.

· A shirtless Mr. Bezos holding his phone in his left hand — while wearing his wedding ring. He’s wearing either tight black cargo pants or shorts — and his semi-erect manhood is penetrating the zipper of said garment.

· A full-length body selfie of Mr. Bezos wearing just a pair of tight black boxer-briefs or trunks, with his phone in his left hand — while wearing his wedding ring.

· A naked selfie in a bathroom — while wearing his wedding ring. Mr. Bezos is wearing nothing but a white towel — and the top of his pubic region can be seen.

· Ms. Sanchez wearing a plunging red neckline dress revealing her cleavage and a glimpse of her nether region.

It would give no editor pleasure to send this email. I hope common sense can prevail — and quickly.