The Best Actor winner for "Crazy Heart" cited one of his best-known roles, in "The Big Lebowski," when asked 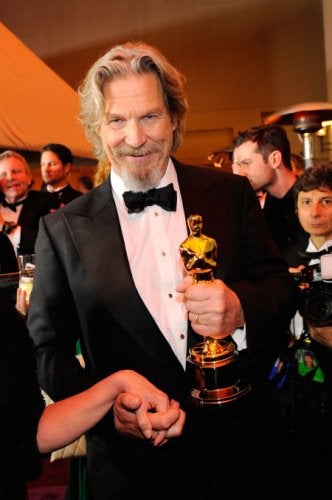 about the arc of his career: "Well, you know, ups and downs. What did the Dude say? Strikes and gutters, man."

Asked if he identified with his character, musician Bad Blake, Bridges said what he really identified with was the music. "I’ve been writing music and playing music since I was a kid. I don’t think [Bad] had great parents, he had four probably great wives that he got rid of. But I have a very strong marriage, you know.  Bad didn’t have that. There’s a lot of stuff he didn’t have. "

In fact, Bridges cited his wife as the key to his success. "She holds my kite string that allowed me to go way out there. And it’s so sweet to be reeled back in. She pointed out this morning that we’ve been apart 11 of the last 14 months. So my wife and my girls, they’re like the tails on the kite."

When a reporter suggested maybe he should form a country band with co-star Colin Farrell, Bridges replied: "I don’t know about forming a country band. It sounds like a good idea — I’ll talk to those guys."

Bridges said he was in favor of having 10 Best Picture nominees, although he admitted to being "kind of surprised … that ‘Crazy Heart’ didn’t make it" onto that list. "Or Scott [Cooper, its director]. Bitch, bitch, bitch, right?" he joked. But the "exciting thing to me," he added, was that "this award brings some attention to that great movie. In a way that’s one aspect of what these awards are all about, to bring attention to these great movies that we made. … And i hope a lot of people see ‘Crazy Heart’ because of it."

As to what he has on his plate, Bridges said, "Well,certainly the music that’s gonna bloom for me, that’s something I’ve been doing a long time — this is going to help me continue that.

"But also, there’s upsides and downsides to fame. The downside is you lose some of your anonymity, and for an actor that’s kind of tough.

"The upside is hopefully this award will help bring some peace and prosperity to our world. Because really, movies are more than just entertainment. They’re connecting us. Both movies and music are a common link for all of us, and I’m hoping that this will raise my profile, and I’m all about getting us all together, getting the world healthy.

Returning to the Coen brothers’ cult hit, a reporter asked if the Oscar win will "put ‘The Big Lebowski’ to rest."

"No," Bridges responded. " I’m diggin’ the Dude. I love him. That’s wonderful, the success that that’s had. I was a little disappointed when it first came out that it didn’t do much. But now we’ve got Lebowski fests."