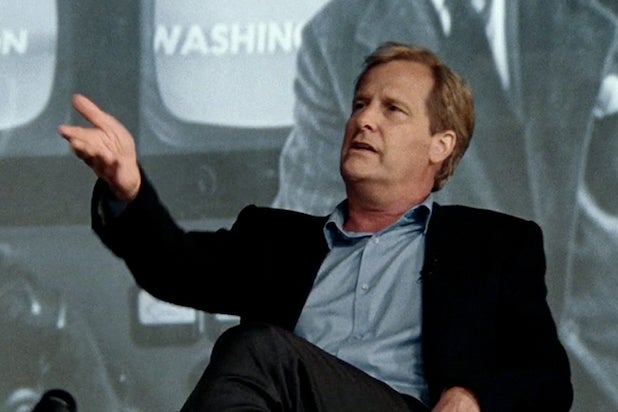 Jeff Daniels has been cast as the lead in Hulu’s upcoming miniseries “The Looming Tower,” TheWrap has learned.

The “Newsroom” actor will play John O’Neill, who was the chief of New York’s FBI counter-terrorism unit before his death in the Sept. 11 attacks.

The 10-episode series will be adapted from “The Looming Tower: Al-Qaeda and the Road to 9/11,” by Lawrence Wright, which looks at the way Osama bin Laden and Al-Qaeda came to power in the years before the Sept. 11 attacks. It also delves into governmental activities around the time, and how a rivalry between the FBI and the CIA could’ve partially led to the attacks. The book won the Pulitzer Prize in 2007.

O’Neill is one of the central figures in Wright’s book. He worked at the FBI until 2001, investigating the details behind the first World Trade Center bombing in 1993. According to Wright, O’Neill was one of the top men behind the initial investigations into Osama bin Laden and Al-Qaeda’s activities, even if some of his coworkers at the FBI and the CIA didn’t cooperate. He was hired to be head of security at the World Trade Center in August 2001 after leaving the FBI.

Hulu describes O’Neill as determined, but flawed. He was “a man of appetites.” The streaming service went on to say that “O’Neill is a lover of expensive food and drink, and is involved with at least two girlfriends, neither of whom know about his wife and children.”

“The Looming Tower” will be adapted by Academy Award-nominated writer Dan Futterman (“Foxcatcher”) and Alex Gibney, who recently directed the documentary “Going Clear: Scientology and the Prison of Belief.”

9/11: A Brief History Of The World Trade Center In Film (Videos)

Before September 11, the World Trade Center was used often by film crews in New York

Before their tragic destruction in the September 11 attacks, the World Trade Center's Twin Towers were among the most recognizable buildings in New York City, which also made them a frequent shooting spot for movies centered in the Big Apple. Here's a look back at the WTC's appearances in movies, as well as some of the most famous callbacks to the Twin Towers after they fell.
View In Gallery