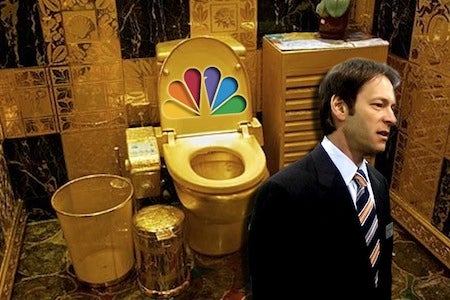 Ever wonder how this reasonably capable executive came to be squeezed out of a job in the new NBC-Universal hierarchy led by Comcast COO Steve Burke?

When Gaspin was promoted to run NBC in July 2009, he decided he didn’t want to share a bathroom with the other executives on the 11th floor of the Wasserman building, according to a knowledgeable insider.

So he ordered the construction of an opulent privy in his own office. How big was it? He displaced two finance executives to make room. I’m told the shower alone is large enough to house a small family. How expensive? I spoke to someone who saw the numbers – more than $200,000.

Gaspin was rather paranoid about this expenditure – understandably so, since he demanded it even as some 40 people were being laid off. He instructed workers to do construction at night, so as not to draw attention to the ostentatious addition.

But Steve Burke got wind of it and took note. Comcast is a notoriously homespun megacorporation; Brian Roberts used to share hotel rooms with his father on business trips. At the recent CES conference in Las Vegas Roberts was spotted standing in the taxi line even as town cars and limos with NBC logos went cruising by.

That wasn’t the decisive factor, but it was the beginning of Burke’s disaffection with Gaspin.

It wasn’t supposed to shake out this way. When word first came to the upper echelons of NBC-Universal in the fall of 2009 that talks were ongoing with Comcast , NBCU President Jeff Zucker was worried that Gaspin might be a strong candidate to take his job, according to insiders.

After all, Gaspin – appointed to run NBC in July 2009 – came from the world of cable, where he sat on the board of the National Cable Television Association with Comcast chief Brian Roberts.

And he knew Steve Burke from negotiating cable distribution deals with him and his team.

“Zucker felt incredibly threatened,” one knowledgeable insider told me. In fact, both Zucker and Gaspin thought they had a shot of being CEO at the new company.

Then a few things happened, starting with word about the fancy bathroom.

After that came the Conan O’Brian-Jay Leno debacle, in which Gaspin was not the main force, but wasn’t an agent of healing either.

The coup de grace came of his own doing, it turns out. Gaspin had interviewed Showtime’s Bob Greenblatt in the fall of 2009 as he considered creating a new top entertainment position, to report to him, according to a knowledgeable individual.

But he didn’t hire Greenblatt – one of the most dynamic creative executives in TV today – at the time, and the Showtime executive was miffed. When Burke began looking at executives for his new line-up, he heard the rumors about Greenblatt and called him up.

Greenblatt was interested, but after being rebuffed by Gaspin once, and having reported to Matt Blank for years, he said he only wanted to report directly to Burke.

According to another knowledgeable insider, Gaspin was initially on board for a top job that would have had Greenblatt reporting to both him and Burke. Gaspin was reluctant, but ultimately accepted that.

But somewhere along the way, Burke lost his excitement about having Gaspin on the team. He reduced the job, and telegraphed a lack of enthusiasm.

“‘You don’t have to inherit me,'” Gaspin reportedly told Burke. “He wanted to know that he was wanted,” was how one insider put it.

But apparently he wasn’t wanted, or not wanted enough.

Now Greenblatt has at least in part Gaspin to thank for a new job, and a great new office — with a killer bathroom.