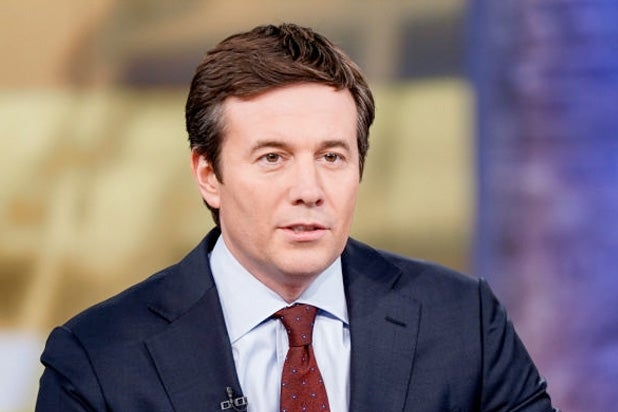 Jeff Glor will stay at CBS News as the new co-host of “CBS This Morning: Saturday,” per CBS. He will also serve as a CBS News special correspondent reporting feature stories and investigative reports.

“CBS This Morning: Saturday” is also hosted by Dana Jacobson and Michelle Miller, whom Glor will join beginning June 22.

Glor was recently replaced by Norah O’Donnell as the anchor of “CBS Evening News.” O’Donnell left “CBS This Morning” for that gig. She was replaced on the morning show by Anthony Mason (and Tony Dokoupil, while John Dickerson moved to “60 Minutes”), whom Glor is now replacing.

Got it? Yeah, pretty much only Gayle King stayed put in all of this.

“Jeff brings a humanity to his reporting and will be a perfect fit on SATMO, as it is fondly called around the CBS Broadcast Center,” said Susan Zirinsky, president and senior executive producer of CBS News. “Jeff and Brian Applegate, executive producer of ‘CBS This Morning: Saturday,’ have an extraordinary history together and have known each other for more than two decades. I am thrilled they can build on their creative partnership with Dana, Michelle and the entire team.”

“I’m looking forward to working closely with Brian again,” Glor said. “The Saturday broadcast is a gem. Brian and his team have established a destination program for news, culture and music. I can’t wait to work with Michelle Miller and Dana Jacobson. I’m also honored to follow in Anthony Mason’s footsteps, who is a writer, host, and colleague I’ve learned from for a long time.”

“I’m thrilled to have Jeff join this broadcast,” Applegate said. “We have a loyal audience on Saturday, and I know Jeff’s voice will be a wonderful addition to what our viewers have come to expect. It’s going to be fantastic.”

Also Read: Jeff Glor to Leave 'CBS Evening News' as He Found It - Dead Last in the Ratings

Glor joined CBS back in 2007 as a correspondent. He was CBSN’s lead anchor at its launch and anchored “The Early Show” in 2011.

Prior to their time together at CBS News, Glor and Applegate worked together at local TV stations in Boston and Syracuse.

Glor’s time as “CBS Evening News” anchor came to an end likely due to sagging Nielsen ratings. He inherited both the job and its third-place status from predecessor Scott Pelley.