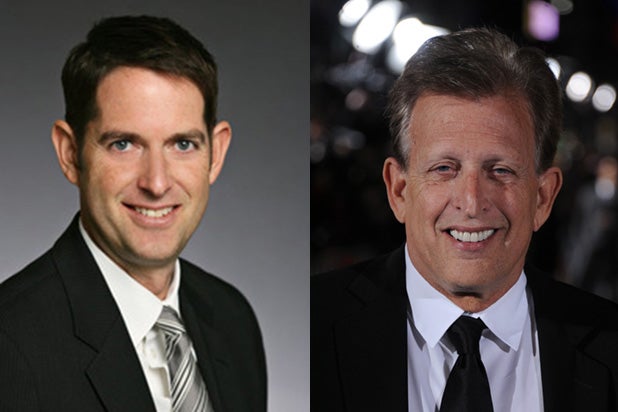 Jeff Kirschenbaum has left his post as co-president of production at Universal Pictures to launch a new company with “The Huntsman” producer Joe Roth that will be called Roth Kirschenbaum Films, it was announced Friday.

Roth and Kirschenbaum first collaborated on the box office hit “Snow White and the Huntsman” and worked together again on its upcoming sequel, “The Huntsman.” Kirschenbaum also developed Roth’s adaptation of “The School of Good and Evil” at Universal.

“I am proud and lucky to have Jeff as my partner. His work on the ‘Fast and Furious’ franchise has been great, and he has been a tireless studio partner on our two ‘Huntsman’ films,” said Roth. “I have found him honest, ambitious, and an incredibly hard worker. I think he is ready to step out and be independent and look forward to what we can create together. I want to thank Jeff Shell, Donna Langley, and Jimmy Horowitz, who have been great to me, and I look forward to doing much more together.”

“I have been blessed to work at the best studio with the best people for the last 15 years,” said Kirschenbaum. “Ron Meyer sets the tone for a culture that is second to none, Jeff Shell is a strategic genius and great leader, and Donna Langley is quite simply the best Chairman in the business and has propelled the studio to new heights of success. I have been so fortunate to work beside Peter Cramer, one of the wisest and most prolific executives in the business.”

One of Hollywood’s top independent producers, Roth’s most recent productions also include “Alice in Wonderland” and its upcoming sequel “Alice Through the Looking Glass,” as well as Disney’s “Maleficent,” “Oz the Great and Powerful” and “Million Dollar Arm.” He also produced the sleeper hit “Heaven is For Real” for Sony and “In the Heart of the Sea” for Warner Bros.

Also Read: Universal to Shatter Record for Highest-Grossing Year Ever in Just 7 Months

A 15-year veteran of Universal Pictures, Kirschenbaum shepherded some of the studio’s biggest tentpole releases, including the “Fast and Furious” and “Mummy” franchises, “Wanted” and “Snow White and the Huntsman.” Prior to Universal, he worked at CAA and Mace Neufeld Productions.

“Shepherding the ‘Fast and Furious’ franchise for well over a decade has been a career highlight, as I have not only been part of one of the most amazing franchises of all time, but truly been part of a family. Universal has been my family,” said Kirschenbaum. “Now I have been given the opportunity to extend that family and join forces with the legendary Joe Roth. Joe is bold, smart, and fearless — and nobody is better at launching and building global franchises. To get the opportunity to partner with Joe, to learn from him and build universes together is a dream come true.”

“Throughout my time at Universal, Jeff has been a supportive and creative partner who never shied away from getting in the trenches with filmmakers. While we are sad to see him go, we are excited that he will continue to work closely with all of us at Universal on projects currently in development, including ’90 Church Street,’ ‘School for Good and Evil’ and ‘Red Rising,'” added Langley. “Jeff is the ideal partner for Joe who is a great storyteller and has a phenomenal track record with films that have garnered critical and commercial success. We look forward creating new opportunities together.”