I’ve long been a fan of the girls-with-guitars movie, that category of stories about young women with talent who bump up against the big, bad music industry only to learn that friendship is more important than fame. The musicians aren’t always talented, and the good guys don’t always win, but this is a plot that encompasses a wide field, from glossy fun like “Josie and the Pussycats,” “Spice World,” and “Starstruck” to more serious fare like “Ladies and Gentlemen, the Fabulous Stains,” “Breaking Glass,” and “We Are the Best!”

“Jem and the Holograms,” a reboot of the popular 1980s TV cartoon, doesn’t quite reach the heights of any of those movies, but while watching this new musical, it’s at least clear that director Jon M. Chu (“Justin Bieber: Never Say Never,” “Step Up 3D”) and screenwriter Ryan Landels like those movies too. This new “Jem” might be pure cubic zirconium, but that doesn’t mean it can’t be part of a fun night out.

In this version of the tale, sisters Jerrica (Aubrey Peeples, “Nashville”) and Kimber (Stefanie Scott) are orphans being raised by their beloved Aunt Bailey (Molly Ringwald), who’s already foster parent to Shana (Aurora Perrineau) and Aja (Hayley Kiyoko, “CSI: Cyber”). Jerrica writes songs but keeps them a secret until Kimber convinces her to record one of her compositions on video while wearing some of Bailey’s vintage wigs and makeup.

The clip goes online, and Jerrica — who performed the tune using the pseudonym “Jem” — suddenly becomes the web’s most viral video sensation since the water-skiing squirrel. Record mogul Erica Raymond (Juliette Lewis) swoops in to make a deal, and Jerrica eventually signs only because Bailey is facing foreclosure on her house.

Also Read: Scooter Braun on Why Even 'Jem and the Holograms' Haters Will Cry at End of Live Action Reboot

The four girls are swept into the glamorous rock lifestyle under the supervision of Rio (Ryan Guzman, “The Boy Next Door”), but while he’s supposedly keeping a close eye on the quartet, they can’t help sneaking out. It turns out, you see, that the seemingly useless robot that Jerrica and Kimber’s dad built years ago comes to life when the ladies leave the deep valley and journey into Los Angeles proper. The robot, named Synergy, starts providing clues that dear old dead dad apparently hid years ago for his progeny. 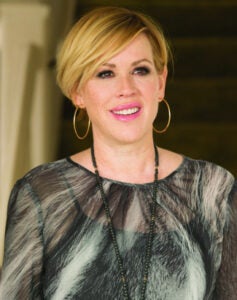 There are wacky shenanigans and attempts to separate Jerrica from her bandmates (leading to a reunion scene nearly identical to the one in “Spice World”) and racing to get to that concert on time, but to get caught up in the plot of “Jem and the Holograms” is, mostly, to miss the point. Even though I wish the songs themselves were stronger — there are a few catchy tunes to be found, but the YouTube ditty that makes Jem an instant star isn’t one of them — there’s an energy and a vibrancy to the movie that its young target audience will appreciate.

In keeping with the movie’s online aesthetic, Chu uses music posted to YouTube by amateur musicians as part of the propulsive score, and interviews with Jem fans that were clearly filmed on laptops in bedrooms across America. It sounds gimmicky, but the results are quite organic.

For those of us who already had drivers’ licenses by the time “Jem” premiered on TV, there’s the always-welcome prospect of seeing Ringwald on the big screen, and even though she’s graduated from ingénue to mom, she still gives some of the greatest scrunched-lip comedy in the business. Lewis has fun tearing into her wickedly villainous role, and Guzman’s just-out-of-the-shower scene elicited gasps across the age and gender range of the screening I attended.

As for our four leads, Peeples believably transforms from shy singer-songwriter type to brash and colorful pop diva. The other three, alas, are saddled with such sketchy roles (Kimber likes social media! Aja’s a hacker!) and so little screen time that they aren’t given much of an opportunity to make any kind of impression.

If you’re a hard-core “Jem” fan who’s still mad that Synergy is no longer a super-computer and that the rival band The Misfits are nowhere to be found (stick around after the credits, I’m just saying), you won’t be won over by this reimagining of the material. But if you never had much investment in the Holograms, and aren’t expecting any singles as great as “Three Small Words” from “Josie and the Pussycats,” you may find this bubblegum musical more of a toe-tapper than you might have imagined.