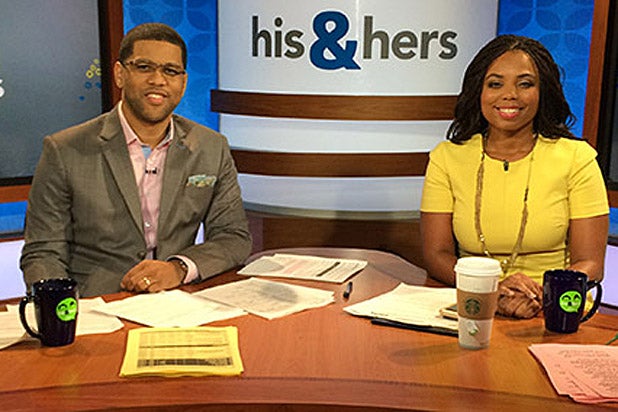 ESPN is currently being called out in certain blogs and among many social media users for not punishing the “SC6” anchor, who recently went on a Twitter rant against President Trump. Hill went as far as to call the POTUS a “white supremacist,” among other very unflattering things. She also fired shots at Trump’s cabinet and supporters, so imagine how well all that went over on Twitter.

For its part, the “Worldwide Leader in Sports” merely slapped Michael Smith’s “SportsCenter” partner on the wrist, releasing the following statement on Tuesday:

Hill (pictured above, right) has not publicly addressed the comments or spoken about her conversation with management. She hasn’t deleted the tweets in question, and she appeared as scheduled on Tuesday’s “SC6.”

ESPN’s response felt weak to a lot of people — especially those that don’t necessarily align with Disney’s political (left) leanings.

Enter: Outkick The Coverage. The sports blog elevated the issue when it reported that ESPN’s Linda Cohn was quietly suspended back in April for criticizing her struggling employer over some decisions. Outkick cried hypocrisy over Hill not getting such a timeout.

We know, we know: Cohn directly criticized her bosses, while Hill ripped perhaps the most public figure in our country — and not a particularly popular one, according to polls. But before readers completely write off writer Clay Travis as simply pushing an agenda of his own — this one conservative — read some of the damning quotes Tucker Carlson’s regular guest got from sources he says work within ESPN’s walls. But first, here’s some background on the Cohn suspension, straight from Travis’ Wednesday post:

According to multiple sources inside ESPN — Cohn declined comment when reached by Outkick — ESPN president John Skipper called Cohn and screamed at her for having the gall to share her opinion in public and told her to stay at home instead of coming to work that weekend. Why was Cohn to stay at home? So, according to an irate John Skipper, she could have time to think about what she had said.

“The guy running our company,” a person identified as a “prominent employee” said, “is not good at his job. When is he going to fire himself instead of firing everyone else?”

“If Jemele can say that and Linda can’t say what she said, what kind of standard actually exists here? There isn’t one,” another person described as an “ESPN personality” said. “There’s clearly a double standard. If you say things the company agrees with, you don’t get punished. If you say things the company disagrees with, you do get punished. Maybe even fired.”

“If I’d said Obama got elected because he was black is there any way I’d still be employed here? No chance,” a third source that was also identified as a “prominent employee” said. “But Jemele can say Trump got elected because of white racists and no one does anything? They protect the people they agree with politically. They give them better jobs, more money, everyone can see it.”

“I pretend I’m a Democrat so I can keep my job here,” a fourth ESPN-er told Outkick. “And there are others just like me. We’re like a secret society inside ESPN.”

“I’m tired of pretending this company is not full of sh–,” said a fifth employee.

Click here for the full Outkick The Coverage post, here for our story on Huckabee Sanders’ remarks, and here for our original post on ESPN’s nothing-much statement, where you can also find all of Hill’s Twitter posts in question.

ESPN did not have a comment on the Cohn versus Hill situation when reached by TheWrap.